We put all of our expertise, wisdom, experience, skill, passion and effort into manufacturing cigars with the highest quality to satisfy our consumers. Therefore, we celebrate when all the work behind our cigars is recognized with good reviews and ratings. Many of our cigars have been very well-regarded and applauded during 2021.

We have compiled a collection of ratings, reviews and articles that have recognised some of our cigars during the last year. From here you can learn, in addition to expert ratings, some of their characteristics, blends and tasting notes, in case you decide to try one of them.

The first good grade of the year went to our La Aurora 107 Nicaragua. The experts of the magazine ‘Blind Man’s Puff’ awarded 92 points to its Robusto format. This publication’s panel of smokers called it a “Beautiful chestnut cigar, smooth, silky and with an oily mouthfeel.”

In their review, published in February 2021, these experts spoke of a scent of honey in the wrapper and a note of ‘woody spice’ in the foot. And from its smoke, strong earthy and spicy black pepper notes, hints of roasted coffee, flavors of graham crackers, charred wood, cocoa and licorice stood out.

Correspondingly, La Aurora 107 Nicaragua (again  in Robusto format) was chosen by the magazine ‘Cigar Aficionado’ as ‘Cigar of the Week’. It was in the week of May 10th that our cigar was selected by the magazine’s experts, who described it as ‘Slightly reddish and dark with an even combustion’.

“Delivers a smoke that is peppery at first, but settles to show notes of coffee bean, almond, cedar and leather with a finish that hints of nougat,” the authors described in the review, awarding it 90 points.

Thirdly, this cigar was chosen by the magazine ‘Cigar Journal’ as Pick of the Week’. The experts of this publication gave it 92 points in their review, published the first week of November and in which a critique was written about its Robust format. “Pleasant, cool and creamy” is how they described their smoke.

Our latest cigar from the La Aurora Puro Vintage line was given a rating of 96 points by ‘The Cigar Authority’ magazine. In their review published on September 9th, the authors noted, “The blending of this cigar has it all; flavor, aroma and strength that I want in a cigar and it is a testament to Manual Inoa’s skills as a Master Blender.” highlighted the author of the publication. 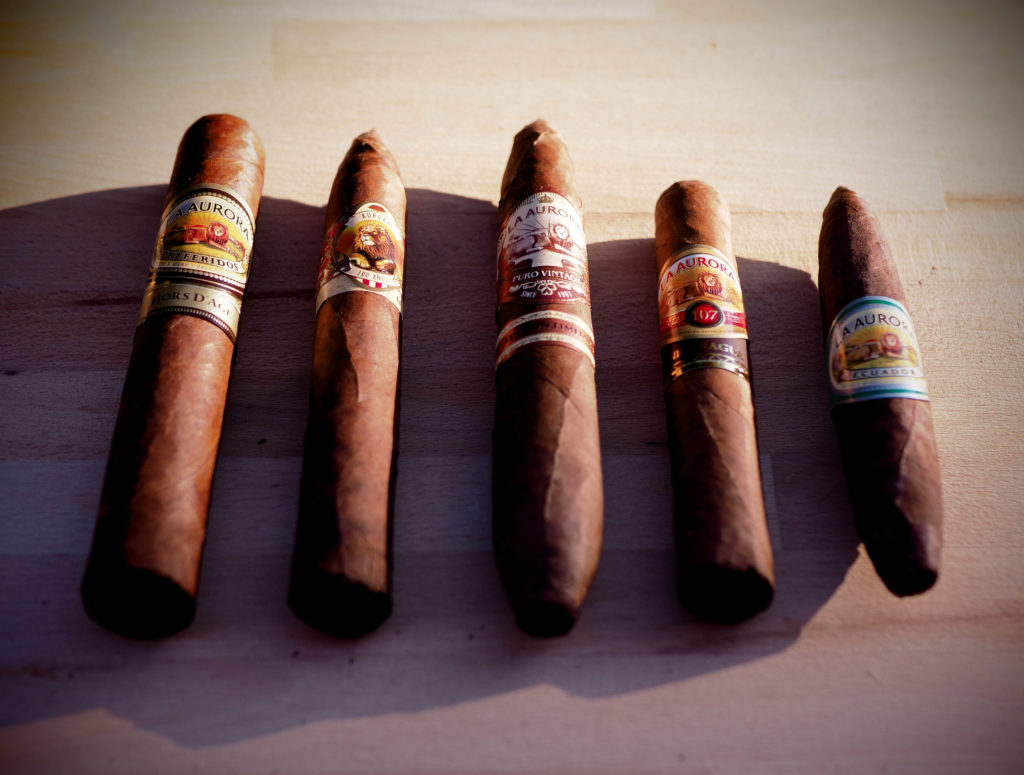 The magazine ‘The Cigar Authority’ awarded 95 points to La Aurora Preferidos Hors d’Age 202 in Toro format. “Smooth, well balanced, with an incredible aroma and a great flavor profile”, this is how the critic described our cigar. He also highlighted its packaging: “Gone are the basic wooden boxes, and in their place appear high-end, humidor-type lacquered pieces that are adorned with a plaque that indicates the number of the box.”

In addition, our La Aurora Preferidos Hors d’Age cigar is among the best cigars of the year according to ‘Cigar Journal’ magazine. This cigar is listed at number eight on the publication’s annual Top 25, which highlighted the amount of time and first-class tobaccos which were invested in this cigar. La Aurora Hors d’Age is also in the Top 20 of ‘Cigar & Spirits’ magazine. Specifically, the Toro format (6 x 54) is ranked 12th in this publication’s 2021 ranking, which reminds that this cigar has a wrapper and binder from Ecuador and a filler with tobaccos from Colombia, the Dominican Republic and Nicaragua.

In addition to these achievements, two of our cigars were nominated for the 2021 Cigar Trophy Awards which are organized annually by the magazine ‘Cigar Journal’. Specifically, our La Aurora 107 Nicaragua was nominated in the category of ‘Best Brand’ of the Dominican Republic and our La Aurora Cameroon 1903, in the ‘Best Value’ of the Dominican Republic.

La Aurora Cameroon 1903 was already nominated in the same category in 2020 and took first prize. Then, the president of La Aurora, Guillermo León, thanked the magazine for all its support to the Premium cigar industry and to the consumers for their support. He then highlighted that this cigar pays tribute to one of our first blends created in 1903.

During the summer, the men’s magazine ‘Bespoke Unit’ gave our La Aurora Preferidos Doble Figurado Emerald cigar a great review. The reviewer included it in the “exceptional” category of the magazine’s ratings. “The perfecto is a very difficult shape to roll” he said in his text, adding “I’m overall very impressed with the construction of this relatively difficult shape and I’m not surprised that it’s one of the brand’s specialties.”

La Aurora 100 Años, in the Connoisseur’s Corner of ‘Cigar Aficionado’

Our centennial celebration cigar, La Aurora 100 Años, held a good place in the Rincón del Entendido (Connoisseur’s Corner) of the magazine ‘Cigar Aficionado’. This publication gave 94 points to this cigar in Corona format (number 4). The author of the text and director of the magazine, David Savona, referred to it as a “spicy and herbal” cigar, which shows “plenty of power that 16 years of aging have yet to temper.”

News of La Aurora, in the specialized press

Our cigars have not only received good reviews and ratings throughout 2021. The industry press has also been promptly reporting our news. For example, in August, different specialized press media published news about our latest creations.

La Aurora Cigars, amongst the best companies to work for in the North Region 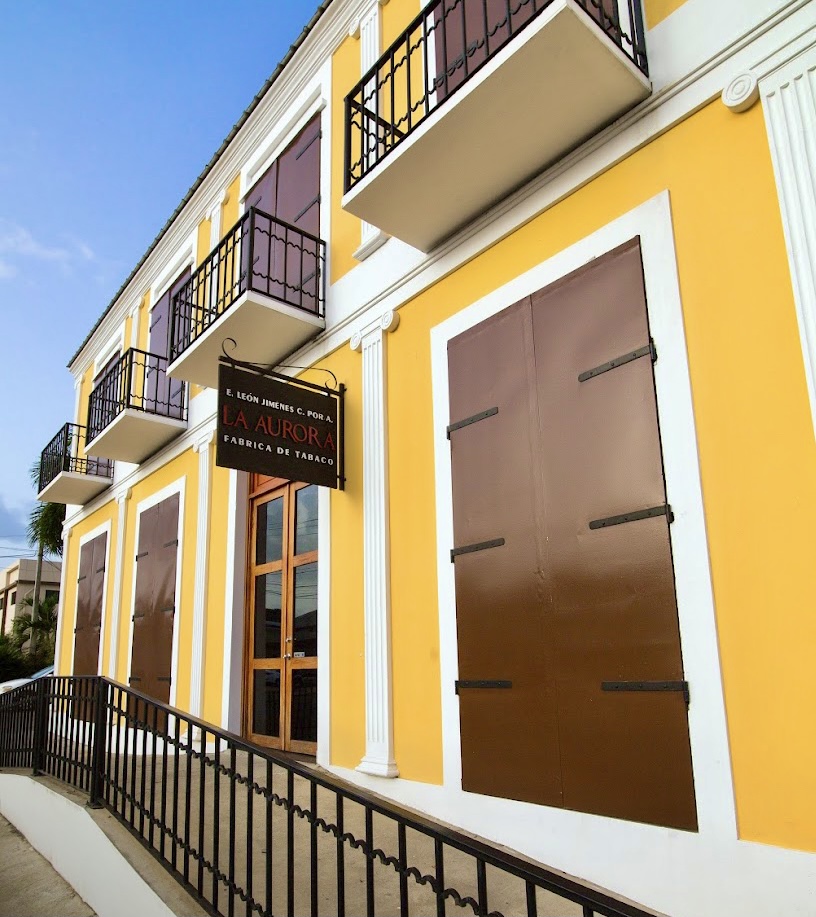 Finally, in addition to the recognition of our cigars on the market, our company as a whole was also spoken of very highly. For another year, La Aurora Cigars was amidst the best companies to work for in the North Region of the Dominican Republic. In the ranking carried out annually by the magazine ‘Mercado’, our factory was rated in the top three companies.

We are very grateful that our continuous effort so that our family of employees can enjoy the best working conditions was recognized in this way. For example, the ranking placed us in the top 3 in terms of hours of training and in the number of female employees, as well as in the first positions in terms of the level of employee satisfaction.

Along these lines, the men’s magazine ‘Bespoke Unit’ published a charming report about our factory in May. In addition to telling the long history of La Aurora which spans 118 years, they also explained their review of our values: honesty, integrity, passion for excellence and good business manners with suppliers and employees. They also detailed how the cigars are made and the different lines of cigars that we have.