The La Aurora Puro Vintage cigar received a 96 point rating in a review published by ‘The Cigar Authority’ on September 9th. To sum up their experience of the cigar, the reviewer states, “The blending of this cigar has it all; flavour, aroma and strength that I want in a cigar and it is a testament to Manual Inoa’s skills as a Master Blender.”

Regarding the appearance of the cigar, whose tobacco is from the 2008 harvest, the review mentions that the cigar is “firm to the touch, hefty and reveals no voids of tobacco.” It also considers its presentation luxurious in the boxes of eight units.

Among his notes, the author of the review detects a subtle citrus touch and sweetness in the cold draw, which reminds him of grapefruit with a pinch of sugar. They also find the foot of the cigar to have a subtle aroma of cocoa with overtones of nutmeg. The reviewer describes the initial ignition of the salomon cigar with “a burst of cinnamon” which “encapsulates the palate and the olfactory nerves.” 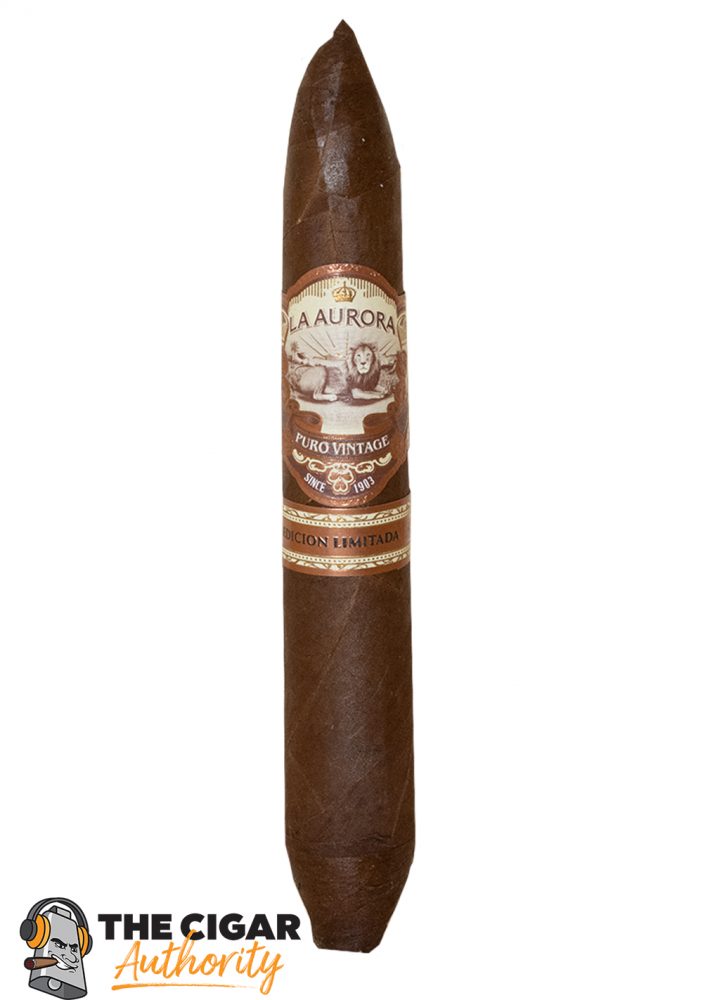 And they continue: “The beginning smokes slow and uneven which is expected on a salomon cigar and once you pass the nipple it evens out and burns perfectly. As we get into the bulbous part of the cigar notes of sunflower seeds, espresso and nuts create an epic flavour profile while the retrohale serves up a subtle lemon zest which complements the espresso notes perfectly.”

The flavour strengthens in the last third of La Aurora Puro Vintage, according to the review

In the second third, the review points to dominant sunflower seed notes, with subtle hints of wheat, rye and some espresso appearing towards the finish. “The retrohale sees some subtle pepper components and an abundance of espresso like aromas with a touch of cinnamon” they add.

In the last third of La Aurora Puro Vintage, according to ‘The Cigar Authority’, notes of earth, wheat and a subtle touch of espresso emerge. “The perceived strength kicks things up a notch, and the retrohale has a nice spice to it while the resting aroma offers up some cinnamon.” they detail.