The La Aurora 1903 Preferidos Doble Figurado Tubo Emerald Cigar has received a great review in ‘BespokeUnit‘ magazine. The author of the review, Paul Anthony, has included the cigar in the outstanding category of the magazine’s ratings. In addition, he added that he was “very impressed” with the overall construction of the cigar.

“The perfecto is a very difficult shape to roll and can have a varying burn. Although the burn line is a little bit wavy, it’s always managed to even itself out. Therefore, I’m overall very impressed with the construction

Regarding the smoke, he points out in general lines that it is a cigar with a medium to full profile, predominated by its earthy notes and a slight hint of spice that progresses into a sweetness towards the end of the cigar. “One of my favorite things about this cigar is the overall mouthfeel and harmony on the palate” notes Anthony.

In more detail, the extensive review published by the magazine on August 4th explains that it is a cigar which features barrel-aged tobacco from Cibao Valley in the Dominican Republic, both in the filler and in the binder, and that it is wrapped by a layer of Ecuadorian leaf from Sumatra, grown in the sun. “It results in a nice brown hue and the roll is very consistent throughout its perfecto shape.” he says.

Regarding its appearance, he describes it as having a ‘medium sheen’ with the existence of some ‘protruding veins’. Paul Anthony also makes note of his opinion and experience with the cigar prior to lighting. He notes his view of the dry draw and the smell of the cigar before lighting, explaining he experienced some hay, some sweet notes and some earthy, ‘barnyard’ notes. 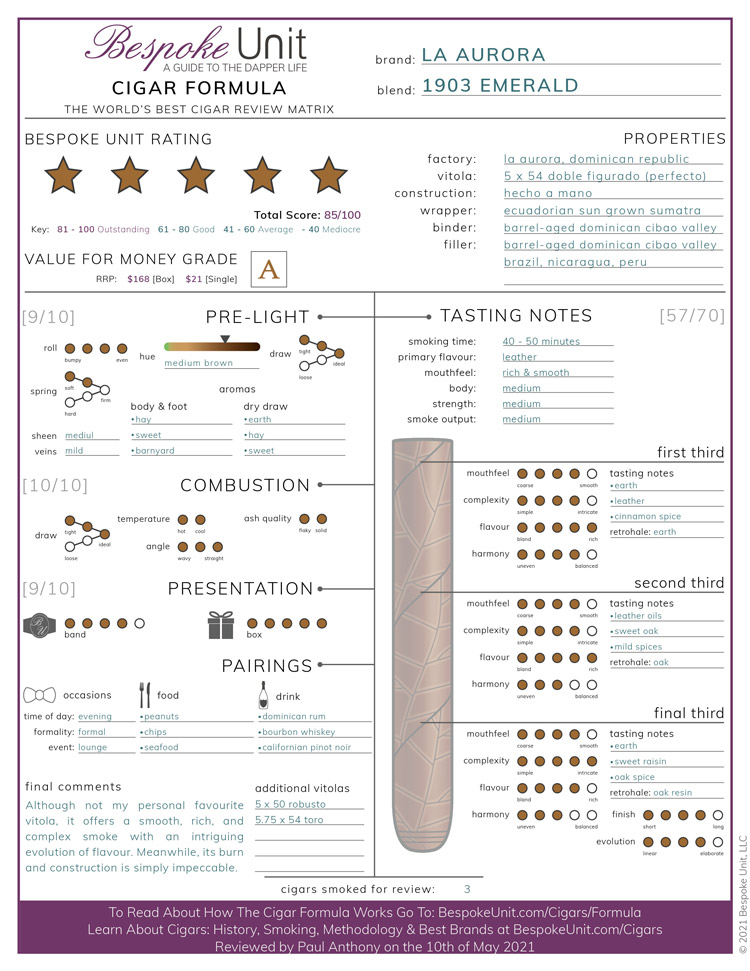 In order to give a thorough review, Anthony explains ‘at least three cigars were smoked’ before he wrote his review. He reviewed the cigar by thirds. In the first third he detected notes of earth, leather, cinnamon and spice, with a rich and deep flavor. In the second third, notes of oily leather, sweet oak and mild spices emerged, remaining consistent but with a nice evolution, according to critique. The final third was characterized by hints of earth, sweet raisin and oak spice, with a medium to medium-plus strength level.

Regarding their presentation, Paul Anthony says that the cigars are presented in boxes of eight units, with “extremely attractive graphics on the box as well as embossing on the wood.” The iconic lion of La Aurora embellishes the centre and, according to the author of the review, “you can see that the tubos are quite substantial as they each contain a 5×54 perfecto cigar.”

Inside the box, it includes information about La Aurora, which Anthony claims, “adds a premium boutique touch.” This information card tells the smoker about the name of the product, the lot number, when it began to age in the cedar room (June 2019), when the cigars were packaged, its release date and the final approval.