Our Brand Ambassador, Libia Fernández, talks about women’s growing passion for cigars in a report published by ‘Santo Domingo Times’ about women in the world of cigars. Fernández is passionate about promoting tobacco education and making people fall in love with the world of tobacco and La Aurora cigars.

Written with the title “Women and cigars, a pleasure that is gaining ground”, the report explains that cigars  (typically  associated with men) first must pass through the hands of women, who are “a crucial part in their production”. The publication adds that in recent years female hands are also “wielding cigars in public”, and that women also enjoy them “with pride and, of course, with great style”. 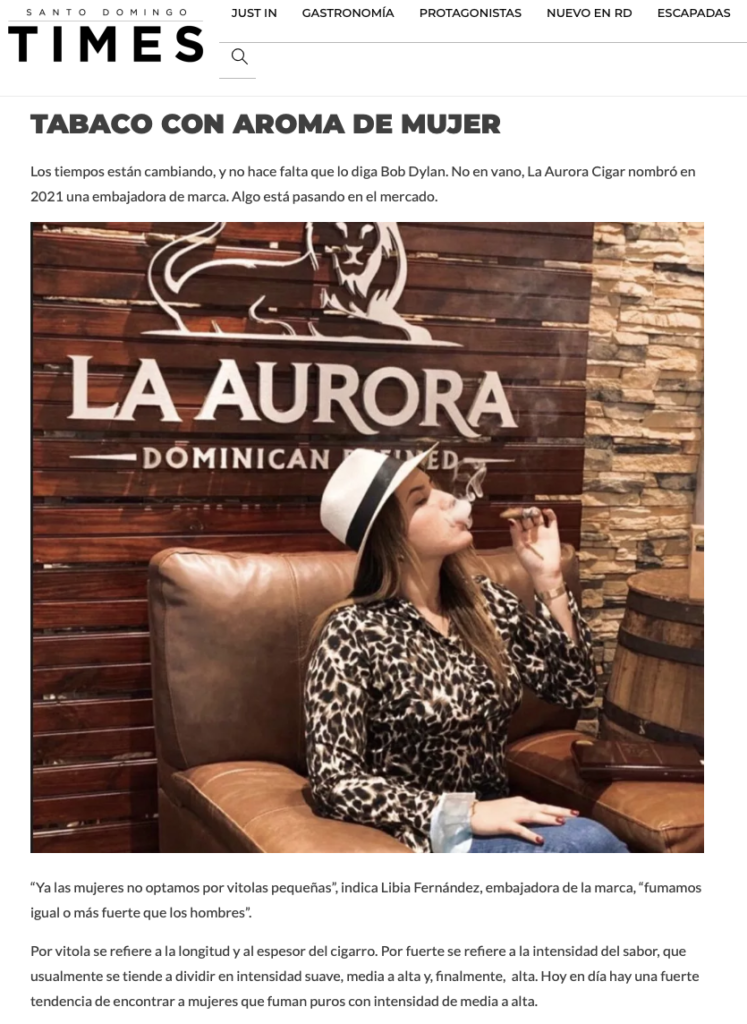 In addition to this, the magazine focuses on highlighting that more and more women enjoy a good smoke “knowingly” and it goes on to say that they “talk about flavours, vitolas, the colour of the ash, the draw” and even about the processes of harvesting and manufacturing cigars. With passion, our brand ambassador Libia Fernández, seeks to connect with all kinds of consumers, regardless of gender wherever she goes.

Libia Fernández: “Women smoke the same or even stronger than men”

“We women no longer opt for small vitolas. We smoke the same or stronger than men”, says Libia in her interview with ‘Santo Domingo Times’. Meaning that women smoke large and thick cigar sizes (vitolas) and cigars with medium to high intensity (strength), and strive to educate their palates.

“There are people who tell me: ‘You are not going to tell me that you can taste that supposed hint of cinnamon or vanilla,'” Fernández then adds, “it is not that simple, but it does happen. It is so interesting that the same cigar can taste different to you depending on your mood”.

Among our brand ambassador’s favourite cigars is La Aurora Hors d’Age, which has a blend of Dominican, Nicaraguan and Colombian tobaccos in the filler, and Ecuadorian in the binder and wrapper. “You can feel resounding changes in each third of the cigar. It’s not boring, it’s not linear in flavour,” the Brand Ambassador of La Aurora explains.

And she adds: “Although some classify it as a strong cigar, I perceive it as medium intensity. In addition, it comes in a gran toro vitola, which is very large”. However, for those who are new to the world of Premium cigars, Libia Fernández recommends the Lancero vitolas, as she considers them more comfortable.