The tobacco used in this cigar was grown in 2008, but it was not put into the cigar until 2019. As the magazine states, “Once the cigars were rolled, they were placed in the La Aurora aging room for two years before being released.”

In its acknowledgement, ‘Cigar Journal’ notes that the cigar gives off notes of wood and cinnamon with a subtle nutty flavor. It also develops sweetness of cinnamon and a woody finish. “A subtle leather component and a light kick of pepper appear,” the publication adds.

Launched in 2021, La Aurora Preferidos Hors d’Age is composed of a wrapper and binder from Ecuador and it’s filler is made up of tobaccos from Colombia, Dominican Republic and Nicaragua. With a strength of 7 out of 10, it has a size of 6 x 54. 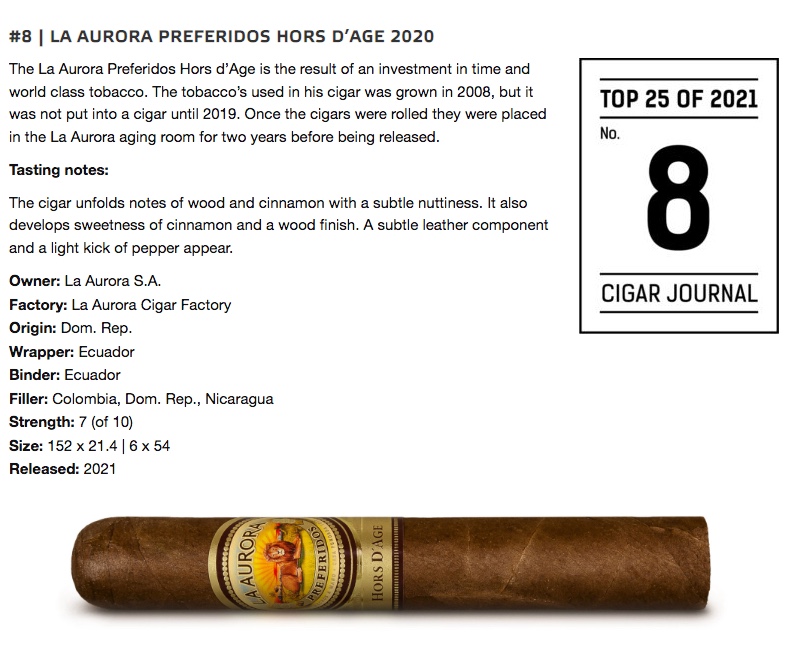 Other La Aurora cigars in the Top 25 of ‘Cigar Journal’

For many years, our cigars have appeared in the Top 25 that this industry magazine annually publishes. For example, last year, La Aurora 107 Nicaragua was number 6 in the ranking. This great position was awarded to our cigar from the Tobaccos of the World collection in Robusto format (5 x 50).

“Ten years after the launch of one of the most successful cigars, La Aurora 107 Aniversario, the oldest factory in the Dominican Republic has taken on the task of revamping this popular series under a new umbrella brand: Tobaccos of the World,” the magazine explained.

It added: “The first big hit of the revised 107 is this 100% Nicaraguan cigar: La Aurora 107 Nicaragua Robusto. The line is completed by 107 Ecuador (the original), 107 USA (originally Maduro) and 107 Dominican Republic (originally Cosecha).”

In 2019, La Aurora 115 Aniversario Regular edition in Robusto format was also in the Top 25 best cigars for that year (Rank 17). The magazine noted its earthy, woody aromas, “supported by spicy, tangy flavors”. Tart, roasted aromas, chili spice and sweetness (from licorice and cacao) were other notes highlighted.

Finally, ‘Cigar Journal’ talked about hints of cloves and fruity notes, which they say give the cigar “an exciting profile”. The tobaccos that make up this cigar come from Ecuador (wrapper), Brazil (binder) and the Dominican Republic, Brazil and Nicaragua (filler). It has a strength of eight out of ten and a size of 5 x 50.