The magazine ‘Cigarro Dominicano’ publishes two pages about the La Aurora Family Reserve Fernando León Legacy Lancero cigar in its 266 edition. On a spread across pages 4 and 5 of the publication, the magazine explains in Spanish and English the characteristics of the cigar and the reason for its creation, paying homage to Don Fernando León.

Specifically, it reports on it’s launch on the Dominican market that honors Don Fernando León Asensio, who dedicated his life to Dominican tobacco since 1937. Additionally, it details the origin of the tobaccos that make up it’s blend: 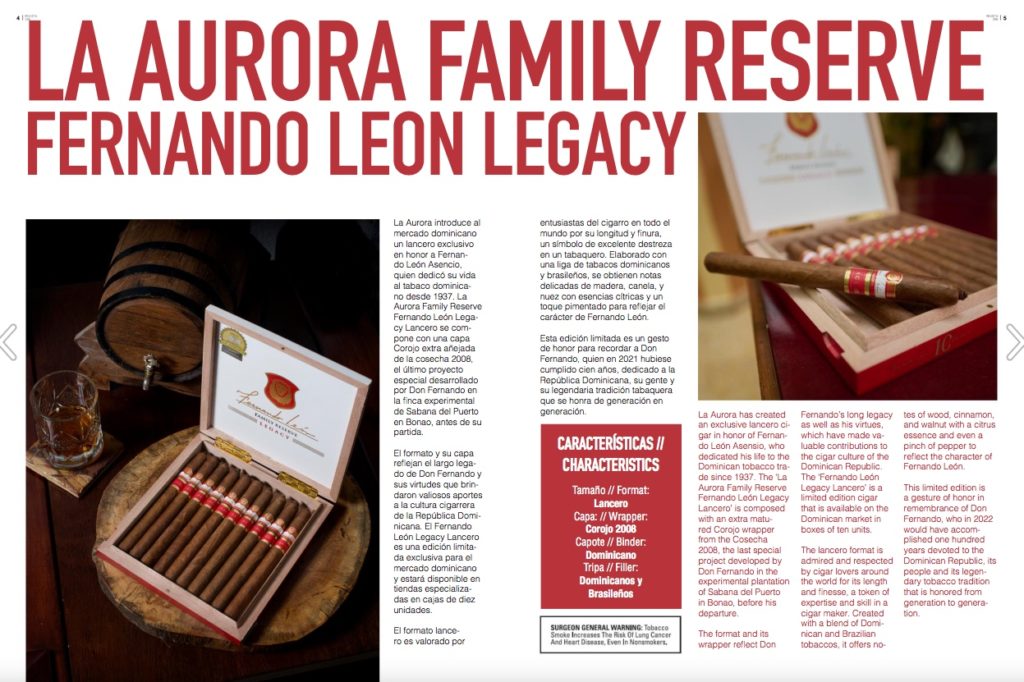 For the wrapper, they explain that the tobacco which is used is part of the last special project that Don Fernando developed in the experimental farm of Sabana del Puerto, in Bonao. The magazine also points out that the lancero format chosen for this cigar reflects the long legacy of Don Fernando as well as embodying his virtues and contributions to the tobacco culture of the Dominican Republic.

Further regarding this cigars format, the magazine points out that the lancero shape is highly appreciated by fans of Premium cigars. In fact, its length and finesse are a symbol of the excellent skill it takes for the cigar makers when it comes to rolling this cigar.

Within the article, ‘Cigarro Dominicano’ recalls that this cigar is a limited edition, which is available on the Dominican market in boxes of ten units. And, finally, they explain that it’s smoke gives off notes of wood, cinnamon and walnut, along with hints of citrus and pepper.