The men’s digital magazine Bespoke Unit has published a nice and extensive review of our company. The publication begins by explaining that La Aurora was founded in 1903 by Eduarod León Jimenes and is the first cigar factory in the Dominican Republic.

“In this guide, you will discover our detailed brand review of La Aurora cigars while learning where and how its cigars are made,” the publication continues. It then organises the rest of the content about our factory into five sections:

In the first section, the magazine details how the company’s history begins. “In the late 19th century, Antonio Gavino León González purchased tobacco-growing land in the Tamboril área. His son, Eduardo León Jimenes, then opened a small workshop in the nearby Don Pedro, Guazumal,” the authors explains.

This small house with six employees was the first facility where ready-to-smoke cigars were commercially prepared on Dominican soil. Until then, the Dominican Republic only grew and cured tobacco for export to countries where it was processed into cigars or pipes, as the article relates.

The magazine also recalls that the first creation was the so-called Preferidos, which we still produce today. Then, the authors explain the change of the factory to Santiago de los Caballeros in 1912. And the text goes on to describe all the steps taken by the company up to the present day. “Today, La Aurora produces nearly a billion cigars per year including machine-made ones of which 8 million are just its own handmade premium lines,” highlights the review. 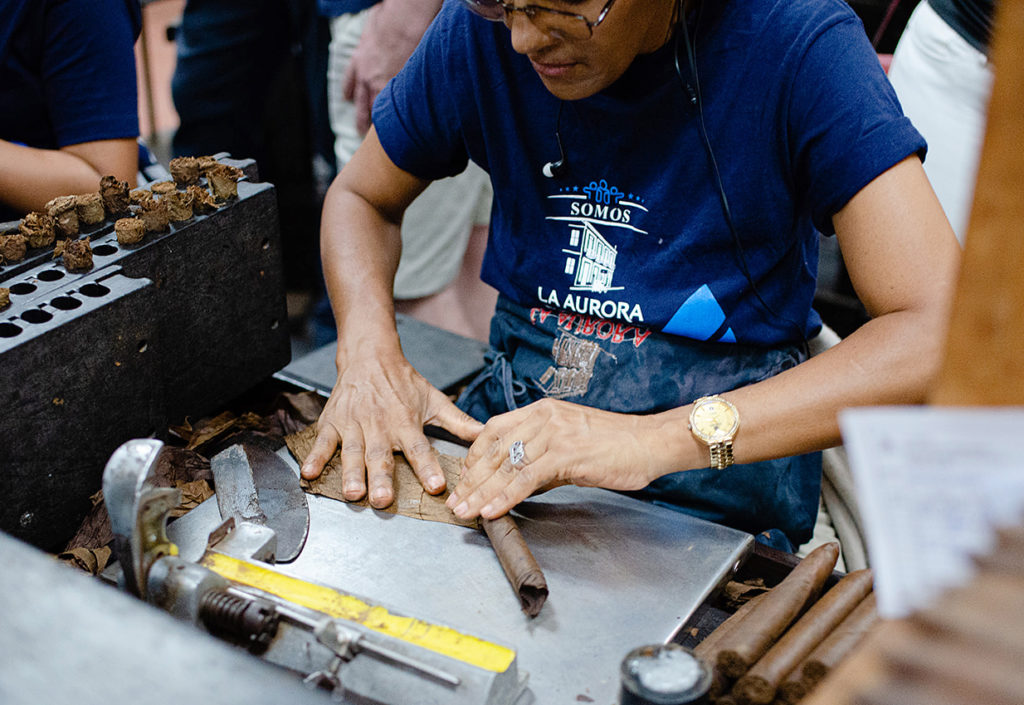 Secondly, the review stresses that La Aurora’s president, Guillermo León, “he has always had a deep respect for tradition as well as a belief in ethics and doing things the right way”. But he also promotes modernisation and innovation among the company’s values. “He envisions La Aurora as a conduit for driving traditions into the future,” say the authors of the text.

They also point out that the company has worked hard on sustainability. The company combines “environmental and social concerns with projects to reduce plastic consumption, reforestation, a housing plan, and economic contributions to provide its people with homes and basic services to improve their quality of life,” says Bespoke Unit.

Where are La Aurora cigars made?

Third, the magazine explains that La Aurora employs more than 2,000 people working in numerous production plants. The factories are located in two of the Dominican Republic’s industrial parks. One of them is in Santiago de los Caballeros whereas the other is in Guazumal, Tamboril, just like the original factory.

As far as tobacco is concerned, tobacco growing is mostly carried out by contracted farmers, although our own agronomists directly oversee the cultivation processes. In addition, we also have our own fields.

Bespoke Unit highlights that we have thousands of craftsmen and workers to produce the cigars. It then goes on to detail the work of some of our key members, such as our master blender, Manuel Inoa, our brand ambassador, Wascar Aracena, and our factory tour guide, Eugenio Polanco.

Review of other products from La Aurora

Finally, Bespoke Unit talks about some of our cigar lines. In addition to La Aurora, it mentions León Jimenes cigars, Family Reserver (Fernando and Guillermo León) or Príncipes (machine-made cigars). It also informs about our E. León Jimenes 110 Aniversario rum and its characteristics.

Bespoke Unit, a guide to the dapper life

Bespoke Unit’s mission, as described by the magazine’s authors, is: “combine encyclopedic knowledge of classic gentleman’s style with current topical content to deliver the most comprehensive, easy-to-search, approachable men’s lifestyle resource on the web”. “Our aim is to help men improve their style, broaden their horizons, and live their best lives,”, they add.