The Chamber of Deputies of the Dominican Republic has recognised La Aurora Cigars for its 118 years of “outstanding work in the tobacco industry in the Dominican Republic”. On July 29th, 2021, the draft resolution for this recognition was approved in a single reading, and on April 25th a delegation of Members of Parliament visited our facilities and presented us with the recognition parchment.

“The Chamber of Deputies, in the exercise of the powers conferred by the Constitution, the laws and its Regulations, recognises the members of the Board of Directors of the company La Aurora for their outstanding work in the tobacco industry, positioning the country as one of the most important tobacco exporters in the entire Caribbean region,” says the approved resolution.

As stated in the diploma presented to us by the deputies Mateo Espaillat, Rosa Hilda Genao and Braulio de Jesús Espinal during their visit, the main points that were taken into account to make the recognition of our factory are:

Being the oldest cigar factory in the country

“The company La Aurora is one of the oldest tobacco factories in the Dominican Republic, founded in 1903 by Eduardo León Jimenes in Don Pedro, community of Guazumal, province of Santiago de los Caballeros. It has been characterised for manufacturing and marketing tobacco products of the highest quality, positioning the country as one of the most reliable producers in the tobacco market”.

The quality of our products

“Due to the quality standards and success of La Aurora products, they are marketed in more than eighty countries, some of which include: United States, Spain, Russia, France, Germany, Italy and Greece”.

“La Aurora is one of the companies that employs more women in the Cibao region, promoting the inclusion of women in the labour market in an equitable and fair manner. In addition, it occupies the first place in the group of companies of this kind in encouraging the growth and training of its employees, with approximately 2,300 employees, who have received about 29,273 hours of training in their areas of work”.

“Since its foundation, La Aurora has promoted a work ethic based on family values. It takes into account the most important aspects of Dominican culture, promoting good traditions among its workers and the development of the country through investments in different sectors, such as agriculture, tobacco cultivation and tourism, among others”.

“With the creation of the E. León Jimenes Group, after years of tireless work in the cultivation and marketing of tobacco, the company begins a process of transformation through which strategic alliances are produced, among which is the signing of the agreement with the company Philip Morris Inc. in which it acquires the exclusive right to manufacture and sell Marlboro cigarettes in the Dominican Republic”. 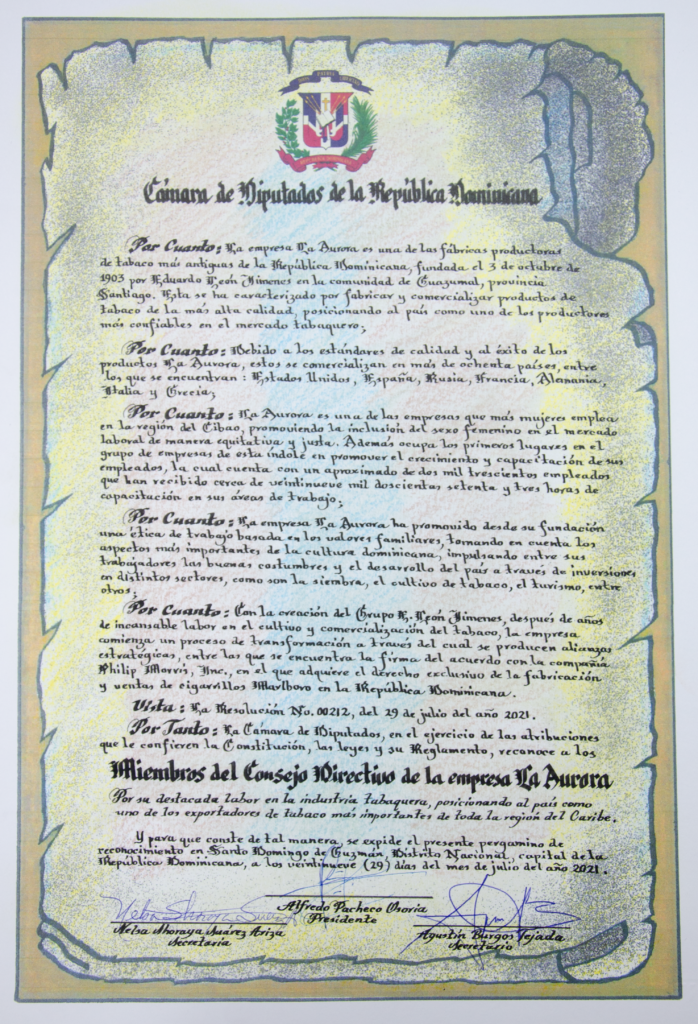 Applause for companies that contribute to the development of their environment

“We submitted this bill to our Chamber of Deputies with the aim of acknowledging one of the oldest tobacco exporting companies in the country, La Aurora,” deputy Mateo Espaillat from Santiago, published on his social networks after the approval in the Chamber of Deputies.

“From our deputation, we feel committed to recognising the work of those companies that, like La Aurora Cigars, contribute to the development of Santiago,” said deputy Espaillat, who proposed the recognition, after announcing the approval of the resolution in the Chamber of Deputies.

From all of us at  La Aurora Cigars, we want to express our deepest gratitude to the Chamber of Deputies and the commission that came to visit us and gave us the certificate of recognition of our work following their commitment to promote the development of Santiago and the country.