“This stand out year has more than earned them this award” for Best Brand in the Dominican Republic, according to the magazine on page 137. The article begins by explaining the history of our company, which began at the end of 1903 by Eduardo León Jimenes when he was only 18 years old. Then, it highlights some of our successful lines: León Jimenes, La Aurora 1903 Preferidos Edition, La Aurora 100 Años or La Aurora 107. 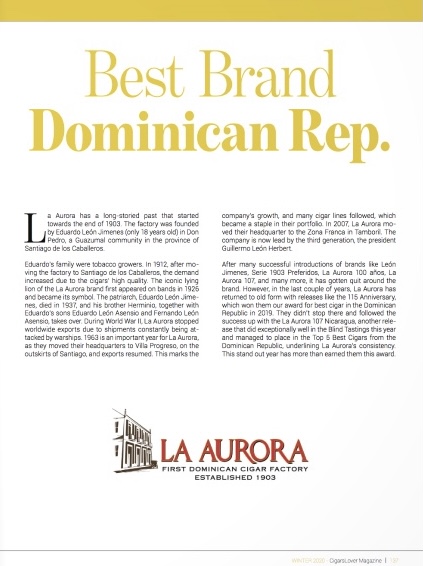 La Aurora 107 Nicaragua, second Best Cigar of the year made in the Dominican Republic

Subsequently, it highlights the most recent releases, such as La Aurora 115 Aniversario, to which ‘Cigars Lover Magazine’ awarded the award for Best Dominican Republic Cigar in 2019. And La Aurora 107 Nicaragua Robusto, which the magazine have ranked as the second Best Cigar of the year manufactured in the Dominican Republic. It also ranks number 9 in its ranking of the 50 Best Cigars of the year. They gave it 93 points and a good review: “a rich and balanced cigar, with notes of white pepper, earth and coffee beans”.

“The La Aurora 107 Nicaragua is part of the Tobaccos of the World Collection from the brand. This series highlights various tobaccos from different countries, and this cigar is made exclusively with leaves grown in Nicaragua. It was introduced this year. Intense, balanced, and equipped with a great harmony”, reports the magazine on page 122.

And it concludes: “Vegetal and roasted notes of coffee beans are followed by spices, among which the white pepper stands out. Then an intense seasoned wood note is added, enriched with nuances of cocoa”.