On October 3rd, La Aurora Cigars turned an incredible 118 years old. On that day in 1903, a young Eduardo León Jimenes founded the factory in the town of Don Pedro, Guazumal community, in the province of Santiago de los Caballeros. At just 18 years old and with nothing but a small investment, he began following his dream of creating a world-class brand of manual cigars.

The first cigars that were manufactured are those that are known today as ‘doble figurado’. Nowadays, these cigars (known as La Aurora Preferidos) are exclusively manufactured in a limited fashion: just 100 units per day, per artisan. This is how La Aurora was first built, the stepping stone of the largest business group in the Dominican Republic, the E. León Jimenes Group.

In 1912, the factory moved to the city of Santiago de los Caballeros. During this transition, the company also evolved and La Aurora began to stand out above most of the cigar factories in the city. With this came an increased workload, mainly due to a greater demand for their products and recognition of the quality they delivered.

Two years later, the first bands were placed on cigars. They were red and gold, created as a token of appreciation to the Spanish coat of arms. In 1922, Francisco Fernando Arturo León Asensio was born in Santiago de los Caballeros. He would later go on to  take over La Aurora for almost half a century.

Don Fernando León Asensio became a legend in Dominican tobacco culture. His passion, knowledge and relationship with the tobacco growers of the Cibao Valley, of whom he earned the respect and admiration, made him a very loved and acclaimed man in the industry. Several of La Aurora’s cigars bear his name in honor of all his devotion and work for tobacco and the cigar culture of the Dominican Republic.

In recognition of the labour and work of Don Fernando, the following cigars have been manufactured:

The birth of the lion logo 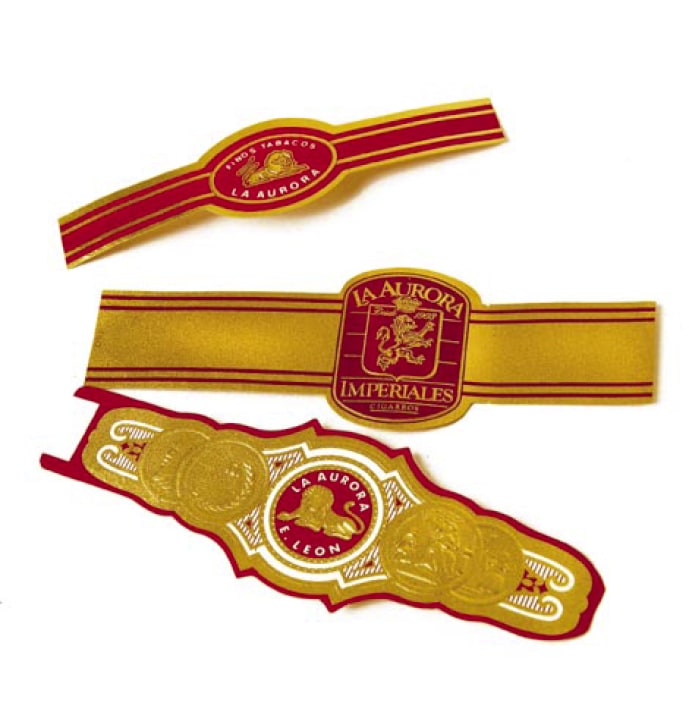 In 1926, the lion lying on the bands of the La Aurora cigars appeared for the first time above the words ‘E. León’ (Eduardo León, founder of the company) in gold on a red background. This lion became the true symbol of the brand and the entire business group.

Five years later, La Aurora was renamed E. León Jimenes Company by Shares. The president of the Board of Directors was Eduardo León Jimenes and the vice president was his brother Herminio. The latter took over the company when Don Eduardo passed away in 1937. Two of his seven children, Eduardo and Fernando, helped their uncle Herminio with the tobacco business.

In 1940, Eduardo León, aged 21, became president of the E. León Jimenes Group, turning his efforts towards tobacco cultivation. La Aurora’s business and its first cigar exports came to a standstill due to World War II. In the 1950s, the difficulties and barriers imposed by the Trujillo dictatorship, which tried to take over the Dominican tobacco industry with laws and taxes that impeded its development, hindered the business.

In 1951 Herminio sadly passed away. A few years later in 1957, the León brothers created the Union of Workers of E. León Jimenes, C. Por A., ​​which in November signed its first collective agreement that recognized workers rights. With this initiative, they sought to guarantee and reassure their workforce that the machinery and new technologies were not going to cause layoffs, but that these developments would benefit them.

In 1961, Fernando León promoted the planting of the Dominican layer leaf in Sabana del Puerto, south of Santiago de los Caballeros. Although the project had to be halted two years later due to extreme weather, the plantation would serve the company in the future.

Two years later, in addition to the transfer of the factory to Villa Progreso (on the outskirts of Santiago de los Caballeros) the export of cigars to the rest of the world was resumed. The founder’s dream was taking shape again. This renewed momentum was carried out through the collective efforts of the whole family. 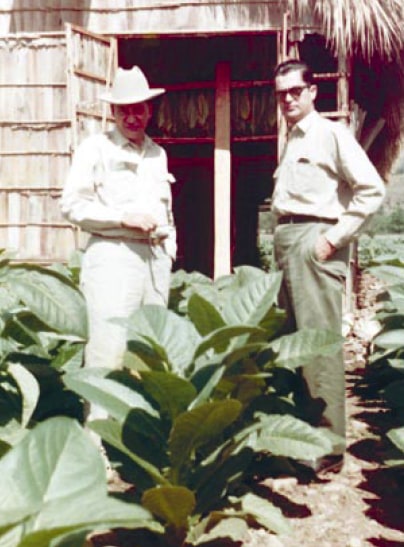 Don Eduardo León Asensio was in charge and along with his own knowledge, the company had the expertise of Fernando León Asensio in the planting and harvesting line of tobacco and in the production area. The youngest brothers in the family, Guillermo and José, also assumed responsibilities in the company.

In 1963, the cigar factory was inaugurated with the presence of the president of the Dominican Republic, Juan Bosch. Six years later, after years of collaboration in the field of blond tobacco cultivation, the E. León Jimenes Group signed an agreement with Philip Morris Inc. for the exclusive right to manufacture and sell Marlboro cigarettes in the Dominican Republic.

In 1983, the E. León Jimenes Group entered a new sector of brewery by opening Cervecería Bohemia, with brands such as Boehmia, Löwenbräu, and Heineken. Later, they bought Cervecería Nacional Dominicana, owner of Presidente beer. Thus, the group became the leaders of the national beer market.

The birth of the León Jimenes brand

In 1987, the new León Jimenes cigar brand was launched, in honor of the company’s founder, Eduardo León Jimenes, and his brother Herminio. It is a smooth cigar with the famous Connecticut wrapper.

Ten years later the Dominican layer leaf planting project was resumed in Sabana del Puerto. This time under the management of Guillermo León, established in the direction of La Aurora, together with his father since 1995. From there an aged wrapper of high quality was created for the cigar that commemorated the century of the factory: La Aurora 100 Years. With one hundred percent Dominican tobacco, it was launched as a limited edition, but its popularity and demand led to its incorporation into the company’s regular portfolio.

As of the year 2000, La Aurora already had a presence in a large number of markets around the world. It is then when their catalogue began to be renewed with the gradual incorporation of new blends to satisfy the different types of smokers. The La Aurora Corojo and León Jimenes Prestige or La Aurora 1495, which commemorated the anniversary of the foundation in Santiago de los Caballeros.

In 2003, in honour and recognition of La Aurora being 100 years old, the company’s century was celebrated with La Aurora Preferidos 1903 Edition. This was a doble figurado cigar, which is the original format of the cigars from the factory’s beginning. La Aurora 100 Years Belicoso received the award for the best Dominican cigar of 2004 by the prestigious North American magazine ‘Cigar Aficionado’.

Change of headquarters and the presidency of Guillermo León 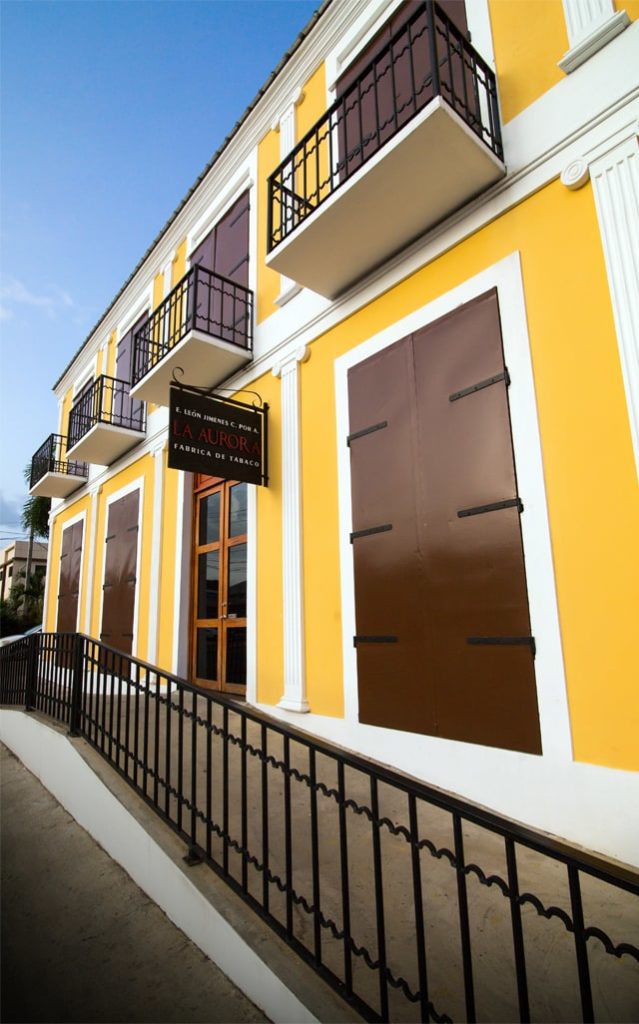 In 2007, La Aurora returned to its roots, changing its operations to Guazumal, specifically to the Tamboril free zone, where the company’s current headquarters are located. In 2009, Fernando León passed away at the age of 87. Two years later, his son Guillermo bought 100% of the shares of La Aurora and separated the manufacturing of Premium cigars from the rest of the León Jimenes Group. That same year, an agreement was signed with the John Middleton company for the manufacturing of Black & Mild.

In addition to this, he continued the growth of the company with new and successful brands. In 2010, La Aurora 107 series was launched, a stronger blend with different formats in response to consumer demands, and Imperiales, a new brand with a Premium presentation.

For the 110th anniversary of the factory, a new product was launched, a rum that pairs perfectly with any cigar. It is a super-premium distillate with ten years of aging: eight years in American white oak barrels and two years in virgin French oak barrels. Its great success is reflected in the 97 points awarded by the Beverage Testing Institute and the Double Gold Medal obtained in the San Francisco World Spirits Contest. As for cigars, a new key range was launched: the Family Reserve.

La Aurora took a leap beyond cigar making. In 2015, the company created an innovative and unique project: La Aurora Cigar World, with the objective of training authentic experts in Premium cigars. Within this project launched the La Aurora Factory Tour, thanks to which you can visit the factory and learn first-hand everything related to the manufacturing of cigars.

Similarly to this project, there is the Cigar Institute, focused on education, communication and dissemination of the tobacco culture. Within its courses, special emphasis is placed on all aspects related to the different varieties of plants, soils, organoleptic characteristics, ligatures, tasting of cigars and pairings of cigars with other products.