Two of our cigars, the La Aurora 107 Nicaragua and the La Aurora Cameroon 1903, have been nominated in the 2021 Cigar Trophy awards hosted by the ‘Cigar Journal’ magazine. The first is among the nominees in the category of ‘Best Brand’ for the Dominican Republic, while the second is in the list of nominees as ‘Best Value’ for the Dominican Republic.

The magazine announced on Sunday 27th of June, the lists of five nominees for each category. The same day the voting period opened, which ends on July 11th. The nominees are the result of the open nomination phase in early June. During this phase, the public submitted 50,000 nominations, as explained by ‘Cigar Journal’. From there, came the five most nominated cigars in each category. 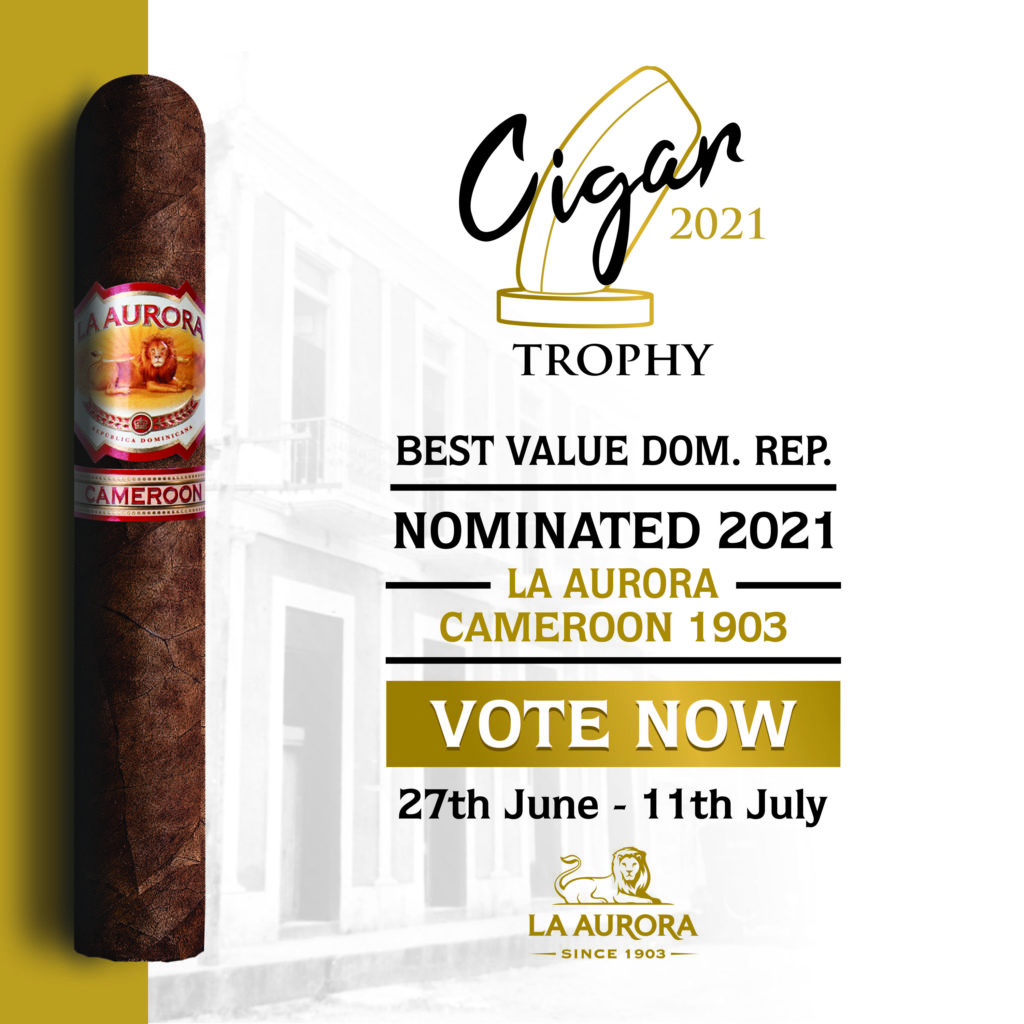 Our La Aurora Cameroon 1903 cigar was also nominated for the same category of ‘Best Value’ for the Dominican Republic during last year’s awards and was voted a winner. The win was announced at the gala awards that were held virtually due to Covid-19. During the awards gala, the president of La Aurora, Guillermo León, thanked the ‘Cigar Journal’ magazine for all of the support it provides to the Premium cigar industry, in addition to all the support offered by enthusiasts and consumers.

Likewise, Don Guillermo was very grateful for the award given to La Aurora 1903 Cameroon. In his speech of appreciation, he pointed out that La Aurora Cameroon 1903 is a tribute to one of our first blends created in 1903 and that it is a cigar made by our skilled and passionate artisans.

La Aurora Cameroon 1903 is a cigar from the Original Blends line. It is available in a wide variety of formats. It is named in honour of the country in which it’s wrapper was initially grown. Today it is made from seed tobacco from Cameroon, but grown in Ecuador.

With regards to our La Aurora 107 Nicaragua, which was launched in May 2020, this is its first time being nominated. It is made up of Nicaraguan tobaccos in wrapper, binder and filler. It belongs to the Tobaccos of the World collection, which offers a journey through different tobaccos of the world, hand-crafted by the company’s most international brand, La Aurora 107.