Our La Aurora 107 Nicaragua cigar is, according to ‘Bespoke Unit’ magazine, a “fantastic” cigar. “A wonderfully constructed cigar with an engaging mouthfeel and prominent leather and floral notes that, considering its price point, make it totally worth a sample in any of the available vitolas,” the magazine recommends in its review, published on July 27th.

In its review, ‘Bespoke Unit’ ranks La Aurora 107 Nicaragua, one of the cigars in our Tobaccos of the World line, in the magazine’s outstanding (five-star) category. If you’ve yet to try any of La Aurora’s cigars, or even if you’ve indulged in this brand in the past, I can highly recommend the 107 Nicaragua,” says the author of the review, Paul Anthony.

And he points out that its smoke exudes notes of leather with floral undertones, along with a wholesome mouthfeel, which – in his opinion – make this cigar a must-smoke for novice and experienced smokers alike.

In terms of appearance, the reviewer notes that the Nicaraguan wrapper has a dark brown hue with a slight sheen that is “quite enticing”. He also notes that there are slight veins that are not very prominent. Before lighting, he perceives notes of leather, hay and barnyard, as well as sweet notes and sweet notes and candied cherries.

Throughout the smoke, you detect notes of spice, leather, woody nuttiness, white pepper and liquorice. On the retro-nasal inhale, you find floral notes. “Broadly speaking, the mouthfeel of the La Aurora 107 Nicaragua is what most surprised me; it completely covered and stimulated the palate throughout.,” he sums up. 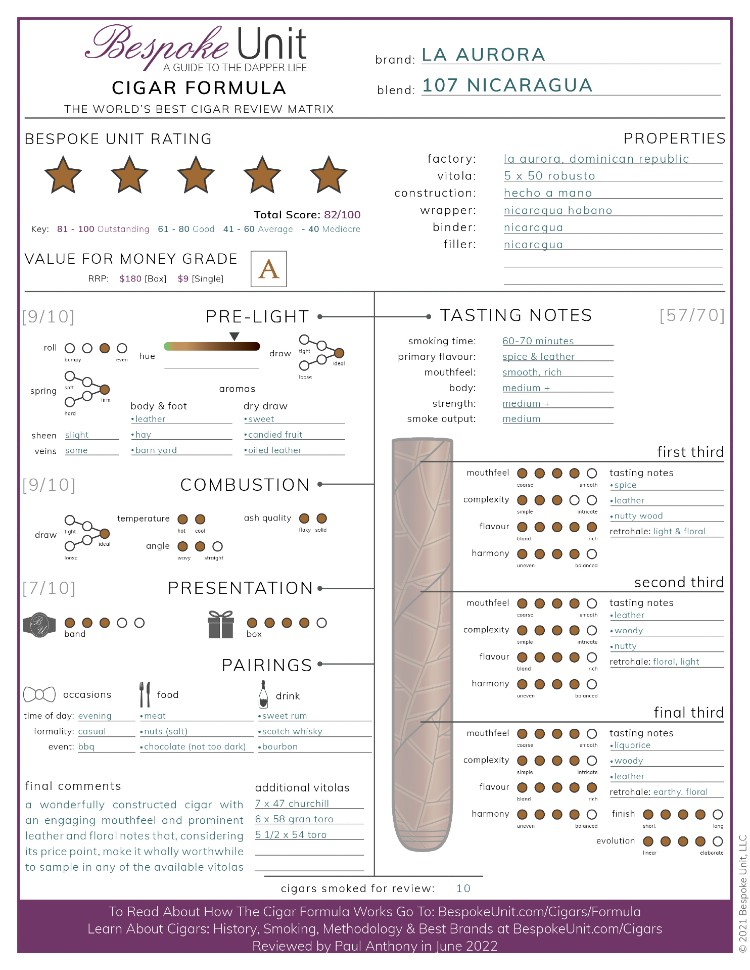 On other aspects, he considers the construction and combustion of the La Aurora 107 Nicaragua to be “commendable”; with an “ideal” draw, as it has a mild but not overwhelming resistance. The temperature of the cigars smoked by this expert “has remained relatively cool”. He considers its ash backbone  “outstanding”, accumulating between 2 and 3 inches of ash, which, in his opinion, speaks to the quality of the tobacco and the expertise of La Aurora’s cigar rollers. He also finds it to be a “mostly consistent” burning cigar.

Finally, the reviewer considers it a cigar to be enjoyed in the late afternoon or evening. He sees it as perfect for relaxed events, such as a barbecue, but also for special occasions, such as a birthday or a wedding.