In December, ‘Tobacco Business’ magazine published an interview with the president of La Aurora Cigars, Guillermo León. In the interview it reviews the history of the company from its beginning (October 3, 1903) to the present day, with growth and innovation promoted by its president.

The interview begins by detailing how the oldest cigar factory in the Dominican Republic was founded. “It was in 1903 that Eduardo León Jimenes, Guillermo’s grandfather, first founded the La Aurora factory. At the time, Jimenes was just a young entrepreneur in his 20s who was inspired to build his own cigar company because his father grew tobacco” says the publication.

And after describing the development of the factory, it goes on to say how Guillermo León joined the family business in 1987, initially overseeing the logistics. Later, the magazine details how his occupations were and the decisions he made in his different roles until he became the president of La Aurora Cigars. 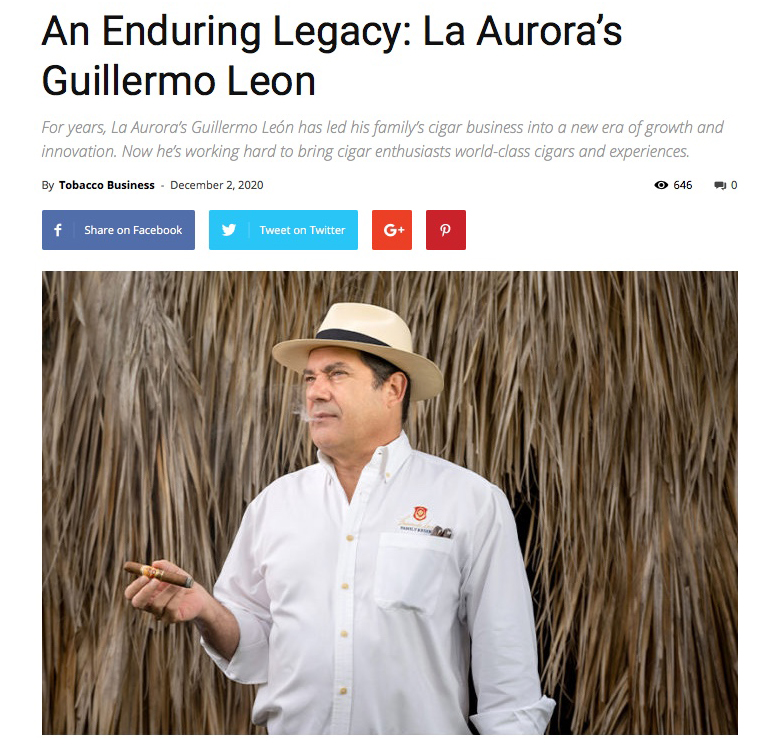 Guillermo León, faithful to the founding values of the Factory

In any case, the interview highlights that the president of La Aurora leads the company with the intention of remaining faithful to the company’s founding values and at the same time finding new ways to adapt its production and presentation to align with modern standards. “The direction of our company has always been steered to what consumers want,” Guillermo León tells Tobacco Business.

“We seek to please people’s demands with a meaningful, diverse and exciting brand portfolio. When we see the potential for a new product to thrive among the countless markets we have in all continents, we get to work and do the absolute best we can to introduce an adapted and compelling product that respects our tradition and legacy as well,” he adds.

The magazine highlights the international projection of La Aurora Cigars, expanding its reach and influence to other countries and smokers around the world. Among othter issues, the relationship with former NBA player Karl Malone, distributor of E. León Jimenes 110 Anniversary rum in the United States, is explained. Additionally, La Aurora manufactures his cigar, La Aurora Barrel Aged by Karl Malone.

In the creation of all the products, La Aurora’s master blender, Manuel Inoa, is the key piece. Thus, the magazine explains his role in memorable releases over recent years, such as La Aurora 100 Años, La Aurora Hors d’Age or La Aurora 115 Anniversary, among other cigars.

As well as this, the publication speaks of the numerous visitors that the factory receives each year in non-pandemic situations; and other factors that set it apart from it from the competition, such as their usage of a newspaper reader. Also working as a cigar roller, the newspaper reader is chosen by the other workers for the position, for which he receives an addiotional pay.