115 years have passed since Eduardo León Jimenes founded the oldest and most internationally renowned cigar factory in the Dominican Republic, maintaining the values ​​of quality, dedication, effort and perfection that have characterized it since its founding. 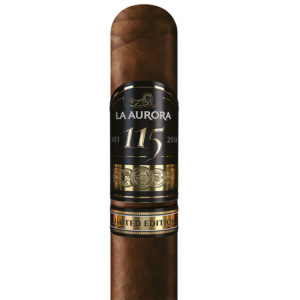 This cigar, La Aurora 115 anniversary, is the culmination of a meticulous selection process that pays homage to our centennial values ​​of quality and perfection. With an oily layer grown in the Dominican Republic, the cigar offers spicy notes such as cinnamon, peppers, rich notes of wood such as cedar and nuts are evident throughout the smoke.

The Aurora 115 Anniversary, in all its editions, will be presented at the next InterTabac Fair (International Tobacco Products and Accessories for Smoking) held in the city of Dortmund from September 21 to September 23, 2018.