La Aurora 107 Nicaragua will be available in the US market in early October. The upcoming launch of this cigar in the United States, from the Tobaccos of the World collection, has been widely reported in the various media of the sector.

For example, the “Cigar Aficionado” magazine published an article on September 17thin which it announced the launch of this cigar for the American market in October. In addition, it pointed out that it is a Nicaraguan cigar, with a wrapper of Habano tobacco, a binder with tobacco from Valle de Jalapa and tobacco from the Condega and Estelí area for the filler.

This cigar—launched at the beginning of the year in the European market and in Summer in the Dominican market—will be available in three formats for the United States:

On October 7th, an event will be held via Zoom with retailers, who will be able to smoke and interact with members of the La Aurora sales team and our master blender, Manuel Inoa, to talk about the cigar. 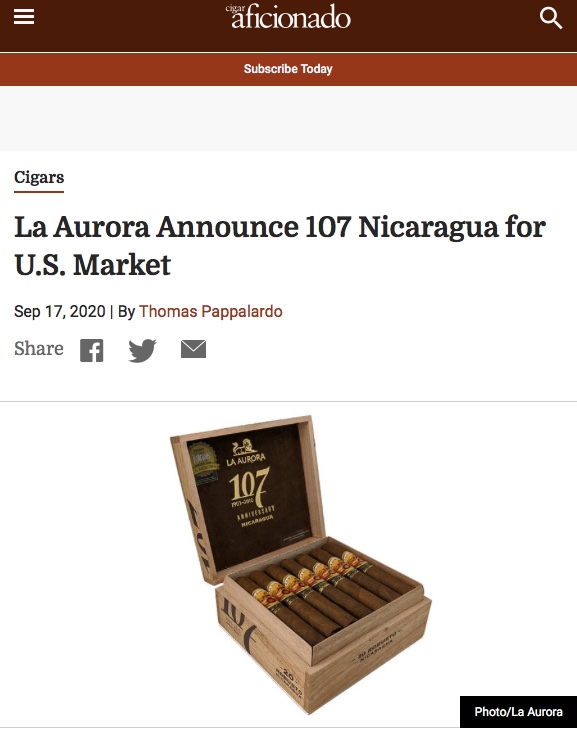 La Aurora 107 Nicaragua: a world of flavors in unique harmony

The “Cigar Coop” blog also reported on this upcoming release. Their article, published on September 16th, recalled the words from our master blender. “This cigar takes you through a world of flavors and aromas in unique harmony,” says Manuel Inoa.

On the tasting note, the master blender underlines: “Spices and spicy notes, combined with the creamy essences of chocolate and coffee mixed with hints of wood, all perfectly balanced, make this cigar a real pleasure.”

“We always seek to broaden our clients’ horizons through knowledge and experience, and this time we continue our mission with La Aurora 107 Nicaragua. It is a truly extraordinary cigar,” adds Master Inoa.

In addition, “Cigar Coop” includes in their text words from Jason Wood, Vice President of Miami Cigar and Company, distribution partner of La Aurora in the United States. “We are very excited to be part of such a momentous launch for La Aurora. 107 Nicaragua is a true showcase of what the artisans of La Aurora are capable of, and we are eager to share it with our retail partners and consumers,” says Wood.

For its part, “Blind Man’s Puff”, “Developing Palates” and “Cigar Smoking Man” also published about this launch last September 17th, describing the characteristics of the cigar, the event to be held with retailers, and the explanations of Manuel Inoa and Jason Wood.