Cigars can be made by hand, in a mechanized way or with a mixed method, that is, when the bundle is machine-made, with the filler and the capote (binding leaf), but the wrapper is rolled by hand. The cigar roller or torcedor has a vital role in manual processes. In fact, given its important task in the process of hand-rolling cigars, it usually takes many years to be promoted to master cigar roller.

After the tobacco plant cultivation, and the leaf collection, curing, fermentation, aging and selection stages, it is the turn of the cigar torcedor, who usually undertakes his work in the factory, in a well-lit area. When the tobacco is ready, the following stages when it comes to rolling a cigar are:

For all this work, the main quality a cigar torcedor must have is “awareness,” says the master of La Aurora Luis López, who, after 24 years as torcedor, is now the plant supervisor. “I believe that is the best there is: awareness to make the cigars, because they are going to the market; they are going to be flavored. Awareness is everything”, he says.

López, who works in La Aurora since he was 39, explains how cigars should be handled in order to be perfectly rolled. “We must open the wrapper well, stretch it well in order to roll the cigar, arrange the tobacco properly in the filler and make a nice head. We must do all this while being aware, so that the smoker is able to enjoy the cigar the way he likes it,” he highlights.

The most complex stage when rolling a cigar is placing the wrapper, since, according to master López, “it can ruin the cigar”. We must have good sense of touch in order to determine if a cigar isn’t well made. This happens when: 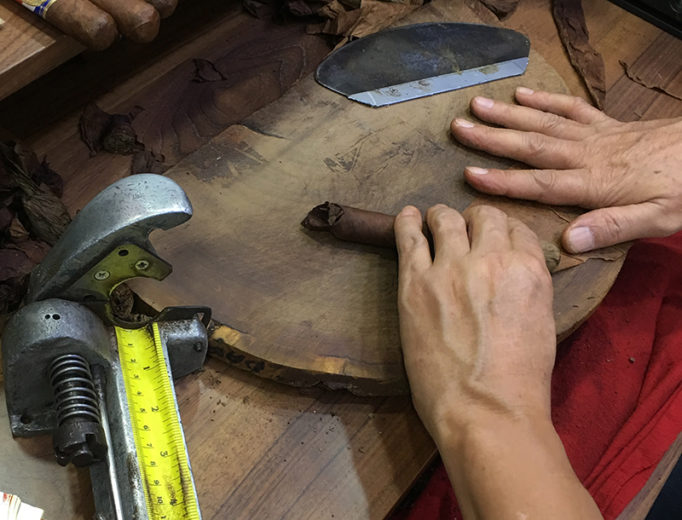 Not all cigars are the same when it comes to the level of difficulty. According to him, the lancero—a fine, long cigar—is very difficult to roll, so he believes only experienced rollers can make it. He also points out doble figurado cigars as being much more complex, and one must be very careful while rolling them. The easiest to roll are the thick, short ones, according to López.