La Aurora Cameroon 1903 and La Aurora Maduro 1985 are on ‘Best Buys of 2021’, the list of cigars with the best value for money for 2021, created by ‘Cigar Aficionado’. Our cigars, both from the Original Blends line, are in fifth and tenth place, respectively, in this ranking of 20 magnificent cigars at a good price for 2021 that the magazine has recently published.

In more detail, the experts of this publication include La Aurora Cameroon 1903 in Churchill format (47 x 7”) in their ‘Best Buys of 2021’ ranking. ‘Cigar Aficionado’ has made this list after analysing hundreds of scores from the 2021 tasting database. The Aurora Cameroon 1903 received 91 points in tastings published in June 2021 and December 2018, in which they point out that it has a strong half.

As for the tasting notes of this cigar, the magazine’s experts explain: “The sweet, warm aroma of fresh baked cookies emanates from this cigar, and the sweetness translates to a plate of cinnamon, graham cracker and almond. Some lean woodiness appears, bridging the honey-like finish.” 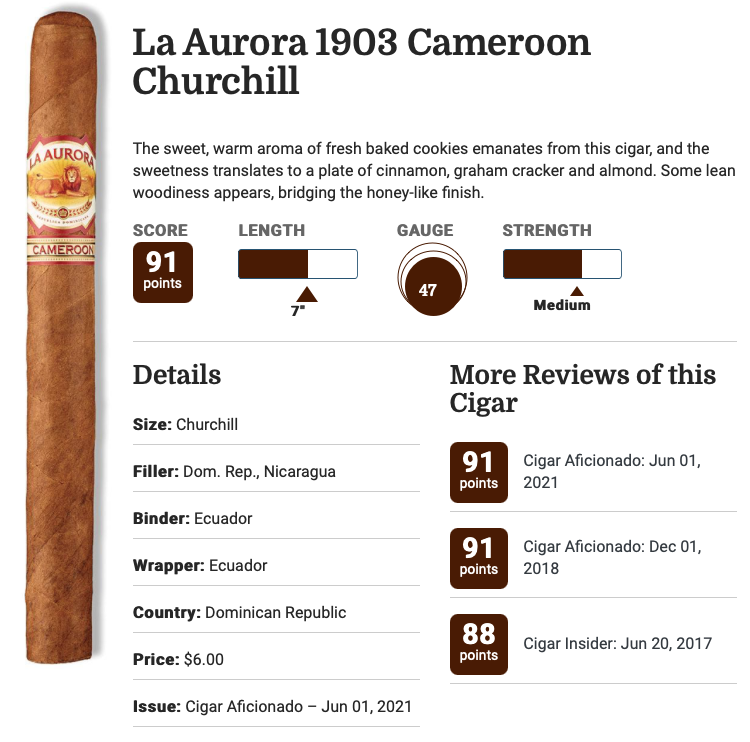 With a wide range of formats and rings ranging from 30 to 58 in thickness, La Aurora Cameroon takes its name from the African country where its bright red layer was originally grown (today it is Cameroon seed grown in Ecuador), in the east of the country, right where the deepest jungle on the continent begins. Its blend is made up of wrapper and binder from Ecuador and a filler made up of tobacco from the Valle del Cibao (Dominican Republic) and Nicaragua.

With regard to La Aurora Maduro 1985, which has obtained scores between 89 and 90 in different reviews from the magazine, the authors of the ranking also include it in its Churchill format (47 x 7”). In this case, they highlight its “near-black in appearance with an oily wrapper” appearance.

“There’s slight resistance to the draw but the burn is mostly even. Notes of roasted coffee and molasses also hint of hazelnut and orange zest.”, stand out from the smoke of this cigar. In addition, they point out that their strength is medium. 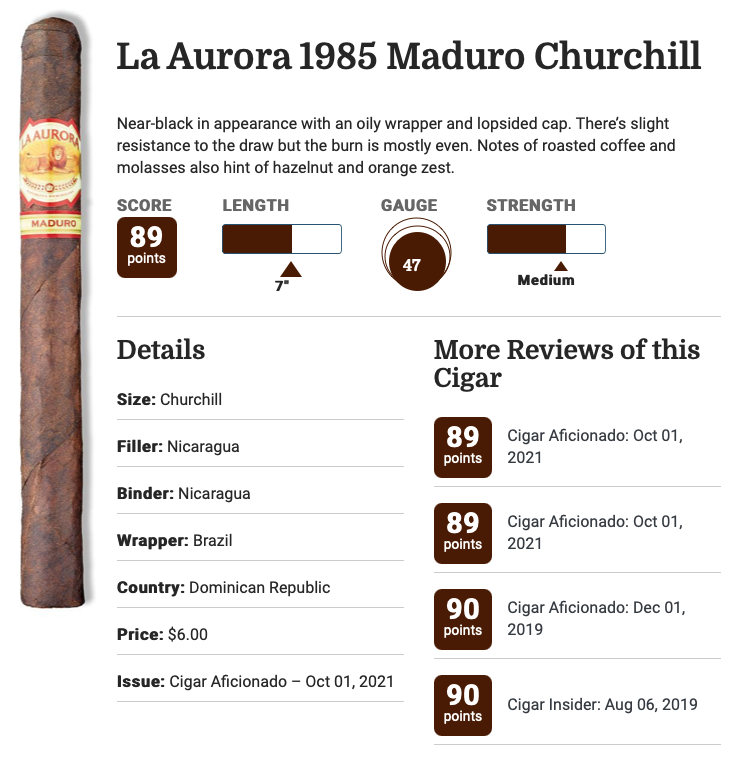 To celebrate our 113th anniversary, we created the La Aurora Original Blends line. These are cigars dedicated to the years in which they began to work with those blends (hence the number in their name) and also to highlight the layers that surround them.

La Aurora Original Blends entered the market as a high quality product at an incredible value, seeing tremendous growth and becoming a key line and best seller for the company. Currently, this line has four cigars. In addition to the two mentioned in the ‘Cigar Aficionado’ best buys list, there is the La Aurora Corojo 1962 and the La Aurora Connecticut 1987.

“We analyzed hundreds of ratings from our 2021 tasting database to see which smokes offer the biggest bang for your buck and found 20 cigars with suggested retail prices of $6 or less (before taxes) that scored 87 points or higher in our blind tastings. Each would make a great addition to anyone’s humidor” explains the author of the article, Thomas Pappalardo.

And he concludes: “While this list features plenty of smaller cigars such as coronas and petit coronas (as you might expect) there are larger sizes too, including toros, a robusto, a grande and even Churchills. No matter your preference, there’s a cigar here that can deliver big flavor without making your wallet too much lighter.”