The online magazine ‘Smoking Seven’ has dedicated three delightful articles to us in the month of March. The first publication is focused on our recent launch, the La Aurora Family Reserve Fernando León Belicoso Limited Edition. The second article details and highlights the activities of the La Aurora Factory Tour within the framework of the Procigar Festival 2022. Finally, the third places a special emphasis on our launch of the La Aurora Fernando León 100 Aniversario Doble Robusto cigar.

The first article in this series, published on March 10th, details that La Aurora Family Reserve Fernando León Belicoso Limited Edition is a very limited production cigar that comes in boxes of 15 units and there are only 1,800 of them available.

In Belicoso format, with a size of 6 ¼ x 52, this cigar has a wrapper of extra aged Corojo tobacco, a binder made of tobacco from Ecuador and a filler with tobacco from the Cibao Valley (Dominican Republic), Peru, Brazil and Nicaragua. With the creation of this cigar, the last personal project of Fernando León (one of the greatest experts in Dominican tobacco with a passion for Corojo) became a reality. 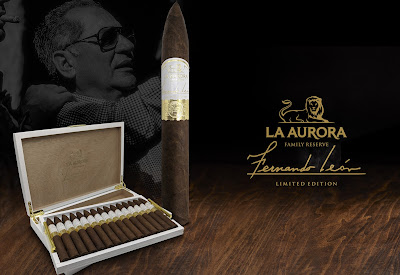 The second article explains in detail one of the days in our factory within the framework of the last Procigar Festival, held from March 22nd to March 25th. ‘Smoking Seven’ explains how the day of the 23rd passed in our facilities, coinciding with the commemoration of what would have been the 100th birthday of the late Fernando León.

The tour, led by our guide Eugenio Polanco, captured the attention of all of the tour participants as described in the article. “He led them around the factory, stopping to answer questions and concerns,” notes ‘Smoking Seven’ in the article, published March 12th. Among other things, the attendees visited the new galley.

After the tour of our facilities, the guests were welcomed into the Centro León, where one of our cigar rollers presented them with a Fernando León Family Reserve Coronas cigar and a welcome cocktail, complete with a live music band! A taste of what was to come for the lunch ahead.

In the framework of the Procigar Festival, tours of our facilities, led by our guide Eugenio Polanco, and a lunch at the Centro Leon.

Before lunch, the president of La Aurora Cigars, Guillermo León, welcomed all of the guests and highlighted how special the event was for the company in general and in particular for himself, since it was dedicated to his father. This year he would have turned 100 years old, so they wanted to honor his legacy.

Finally, the third text published by Smoking Seven was dedicated to the La Aurora Fernando León 100 Aniversario Limited Edition Doble Robusto cigar. It was presented on February 23rd at lunch during Procigar, where it was tasted paired with our E. León Jimenes 110 Aniversario rum. 200 boxes of 10 units. 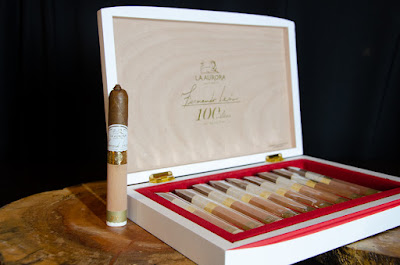