One of the best drinks to pair with a cigar is rum. For this reason, we’ve worked for a long time to achieve a rum that would go perfectly with all the cigars. And we found it. For those who haven’t tried yet, it’s called E. León Jimenes 110 Aniversario. Precisely, we launched it to celebrate our 110thanniversary.

What makes it so special? This is a rum with 10 years of aging, which makes it the perfect match for cigar lovers. Produced at Barceló rum facilities for our company, this is a tasty and complex rum: sweet, spicy, and floral notes that bring out the best notes of premium cigars.

Specifically, this rum remains for the first eight years in virgin American white oak barrels, which provide most of its flavor. For the last two years it’s aged in French oak barrels, which give it homogeneity and fulness. And so, it becomes the “nectar of the gods,” as defined by La Aurora’s master blender, Manuel Inoa.

Three years of searching for this delicacy

As our master blender explains, this rum was developed “mainly for smokers.”  “We spent three years working hard, looking for which of the existing rums in the market could pair perfectly with our cigars. We started by drinking many types of rum, but we weren’t happy with them, because they enhanced some flavors, but not others… There was no harmony,” recalls Manuel Inoa.

And he adds: “We spent three years doing this and two years drinking every day, morning, noon and night… Trying to develop that idea. Trying to find the flavors that would pair with the cigars. And we succeeded.” Regarding the tasting of this rum, Manuel points out that when you smell it, it’s similar to a brandy or cognac. And when it hits the palate, it tastes like a tropical rum. 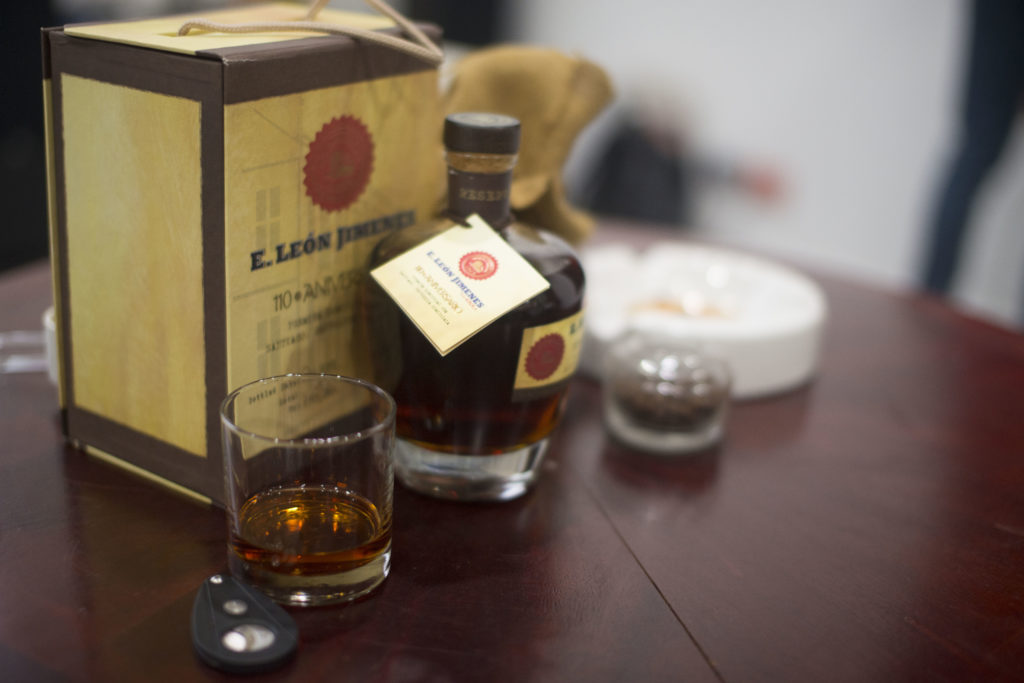 The Beverage Testing Institute, a marketing services company that reviews spirits, wines, and beers, awarded a score of 97 points to our rum E. León Jimenes 110 Aniversario. So, by the standards of this institute’s experts, this is an exceptional rum.

It also received the Double Gold Medal at the World Spirits Competition in San Francisco (USA). This award places this rum as one of the best products in the world. In general, between 1500 and 2500 spirits compete in this competition, but only a little over than ten Double Gold Medals are awarded in its different categories.

On the other hand, the specialized magazine “Cigar Journal” published a review on our rum in August 2019. The review described the characteristics of E. León Jimenes 110 Aniversario and the flavors it offers. According to the review, it’s a fantastic blend of toffee, caramel and toasted almonds, coffee with sweetened condensed milk, some wood and sherry aromas.

The author of the review also finds in our rum “a particularly spicy sweetness, combined with bitter almonds, hints of coffee and woody notes”. “Flavors that delight the senses,” wrote the “Cigar Journal” reviewer.

2 thoughts on “Rum E. León Jimenes 110 Aniversario, the perfect pairing for all cigars”