Rum E. León Jimenes 110 Aniversario was mentioned in a news report in US television last September 19. Specifically, it was mentioned in channel 69 WFMZ during the broadcast of a news story about the distributor of our rum in the United States—basketball legend Karl Malone. 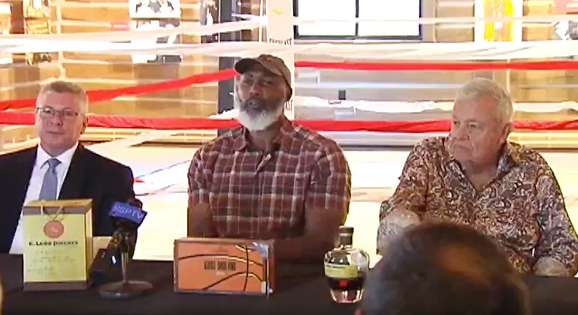 In the scope of promoting our rum with the members of the Pennsylvania Liquor Control Board, in the United States, Malone visited the training camp of one of the greatest boxers of all time, Muhammad Ali.

The news reported Malone’s visit to the training camp in Pennsylvania where Ali prepared for some of his most famous fights. The images also showed Malone along with the members of the Pennsylvania Liquor Control Board, with rum E. León Jimenes 110 Aniversario and his cigar, La Aurora Barrel Aged by Karl Malone.

First close-ups of rum La Aurora, distributed and represented by Malone in the United States, were also shown. Our rum is perfect for pairing with Premium cigars. The Beverage Testing Institute awarded it a score of 97 points.

Malone, distributor of our rum in the USA

The legendary star of the ‘National Basketball Association’ (NBA), ex player of the Utah Jazz team and Basketball hall of fame member, Karl Malone, is the distributor and image of E. León Jimenes 110th Anniversary in the United States. Malone visited in January the factory and the Historical Center of Ron Barceló. In order to live the sensory experience and learn about the production process, Malone visited the Ron Barceló factory in January. Thus, he learned firsthand how the liquor company produces our super Premium rum, of extremely limited production.

2 thoughts on “Rum E. León Jimenes 110 Aniversario, in US television”