As every year, La Aurora Cigars participates in the most important event in the field of premium cigars in the Dominican Republic: the Procigar Festival. In the 2020 edition, which starts on Sunday 16 February in the area of La Romana, La Aurora Cigars has scheduled two tours to its factory, matching events, many cigar tastings and an elegant humidor for the charity auction.

More specifically, the factory tours will take place on February 19–20, since on the 18ththe Festival will move to the area of Santiago de los Caballeros, where La Aurora is located. The participants in our tour will get to know the details of making our cigars and go through all the steps involved, from preparing the soil in which the tobacco plant seed is cultivated to rolling the cigar.

The visit to the factory allows you to make an extensive tour through the different steps and processes that take place until a Premium cigar is manufactured.

After welcoming the group of participants, they will be given water and a cigar kit: La Aurora 1903 Edition Ecuador, La Aurora ADN Dominicano, a cutter and a lighter. The tour starts in the area that shows how tobacco leaves are cured in the farms—with leaves hanging from the ceilings—and sections that replicate, like in a museum, the process of creating a cigar. The cigar rolling room is another stop, where cigar rollers work in the company of the newspaper reader, that keeps them informed.

After visiting the factory, there will be a lunch followed by an event where visitors can chat with the president of La Aurora, Guillermo Leon, as well as with the Hall of Fame and former basketball player Karl Malone. La Aurora makes the La Aurora Barrel Aged by Karl Malone cigar—a cigar made to the taste of this athlete, dubbed “The Mailman” during his NBA career.

Specifically, in this event, La Aurora 115th Anniversary cigar will be matched with rum E. Leon Jimenes, represented and distributed in the United States by Malone himself. To close the whole experience lived by those attending the tour of La Aurora, they will be given a parting gift consisting of: a prospect of the Cigar Institute, a small bottle of rum, cigars La Aurora DNA and La Aurora 1903 Edition Broadleaf, and a custom wooden ashtray. 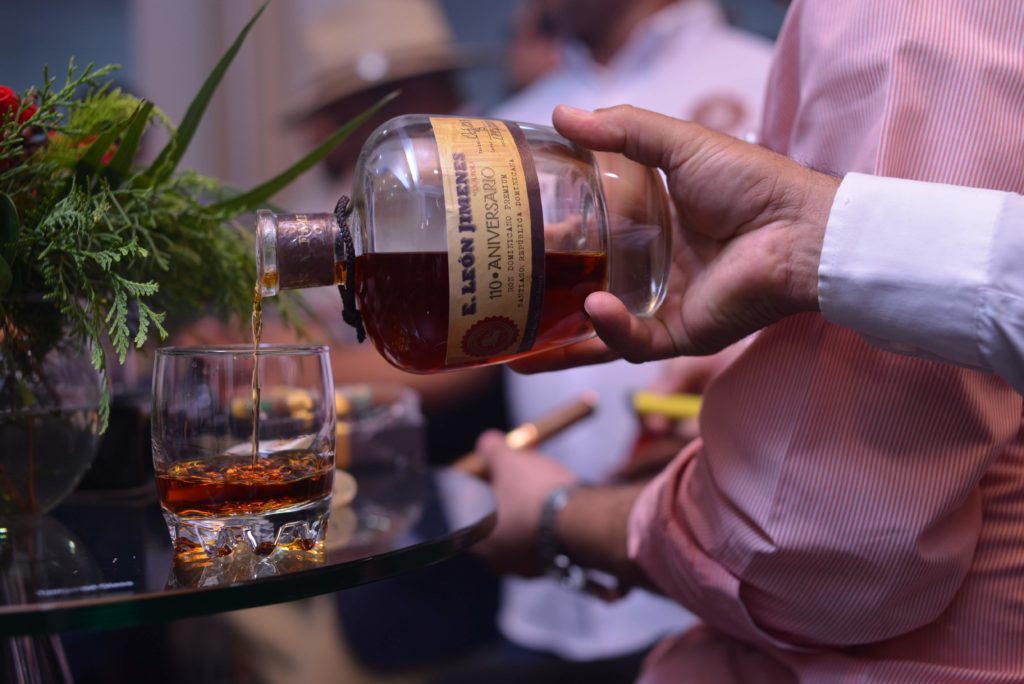 As for the dinners of Festival Procigar 2020, cigars La Aurora 107 Cosecha 2007 Corona Gorda will be offered. For the white dinner party, the cigar will be La Aurora 115 Aniversario Toro (5 ¾ x 54); and for the typical dinner, attendees will be given a chance to taste La Aurora 107 Nicaragua Robusto. For the gala dinner, La Aurora Preferidos Hors d’Age Toro (6 x 58) will be offered.

For the auction held during the last dinner in Santiago within the framework of Procigar, La Aurora will bring the Humidor La Aurora 115 Anniversary Limited Edition with 38 Salomon format cigars, 36 Belicoso cigars, and 88 pieces in Toro size (5 ¾ x 54). The humidor measures 69 x 38 x 18 centimeters. It has a high gloss black lacquer finish with golden hinges and lock.

The La Aurora 115th Anniversary Limited Edition Humidor will be auctioned to raise funds for charitable purposes. It includes 38 cigars in Salomon format, 36 Belicoso and 88 Toro.

The interior is made of Spanish cedar wood, a wood that helps preserve the cigars. It also prevents cigars from absorbing external odors and brings out their own aroma, enriching the cigars. It is equipped with a humidifier made in Germany, which has an adjustable microprocessor and a single membrane.

The money gathered from the products in this Procigar gala dinner will benefit Voluntariado Jesús con los Niños, a non-profit organization to care for sick children, and the Hospice San Vicente de Paúl, a retirement home for the elderly from low income-families.

2 thoughts on “Procigar 2020: activities and products of La Aurora Cigars”