Once again, La Aurora Cigars is top of the list of the most admired tobacco and cigar companies in the North Region of the Dominican Republic. This is how it appears in the study of ‘Empresas más Admiradas de la Región Norte’ (Most Admired Companies in the Northern Region), which is presented each year in the February-March edition of the Mercado Región Norte magazine. This is the third consecutive year that La Aurora has achieved the first position.

On a more general level, from the 312 companies across 49 different economic activity areas analysed, covering 13 strategic sectors of the economy of the Northern Region, La Aurora is the third most admired company in the Northern Region in 2021.

“This firm, like all the industries in this sector, has seen an increase in demand for its production over the last year, in response to which it has strengthened its production capacity and increased its presence in the local market, with a strong campaign focused on values”, says the magazine. 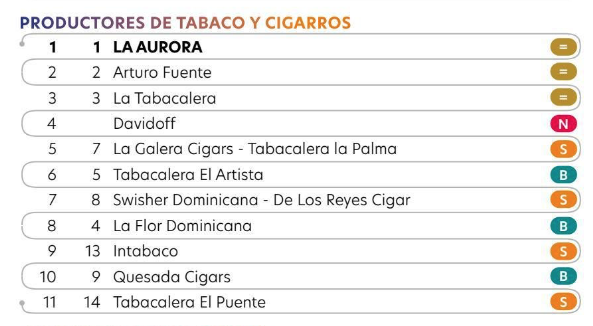 In addition, La Aurora is among the group of companies that, as Mercado explains, “year after year, set the standard in their respective fields of activity, whose leadership is indisputable and which will be very difficult to displace from the privileged position they occupy in terms of prestige.”

La Aurora, among the top five in eight key factors

The report points out that the good reputation of a company is built over the years with professional and ethical work and is based on the union of several factors that must be cultivated on a daily basis: employee training, high management capacity, good customer service, optimal quality, corporate social responsibility actions, maintenance of cutting-edge technology, constant innovation and economic strength.

In all of these factors, La Aurora –the oldest tobacco company in the Dominican Republic– ranks in the top five:

This analysis, carried out by the consulting firm READ Research & Consulting, in which La Aurora is so highly ranked, reveals that “the most important of the intangible assets of any company is any merit is defined by the admiration and the acknowledgement achieved by its excellence in the ways of doing things well for a highly demanding community”, according to Mercado magazine.

Business reputation: the set of perceptions of stakeholders

Business reputation is defined, according to the Corporate Excellence and the Reputation Institute, as the set of perceptions that the various interest groups with which it relates, both internal and external, have about the company. These perceptions arise as a result of the behaviour developed by the company over time and its ability to distribute value to those interest groups.

In short, it is a recognition that a society makes about the behaviour of a company, the quality of what it does and how much it satisfies its consumers. “And to that traditional conception, the impact it generates in the community in which it acts has been added for approximately a decade,” the publication adds.