The ‘Cigars and Leisure’ magazine published an extensive and detailed article about our factory tour in its latest issue. Calling it the “Disney World” of cigars, the author of the article, Brian Ledtke, said that, unlike what had happened when he visited other tobacco factories, he was surprised when he participated in La Aurora Factory Tour. “Saying the factory is wonderful is an understatement”, he says in the text describing his experience during the visit. 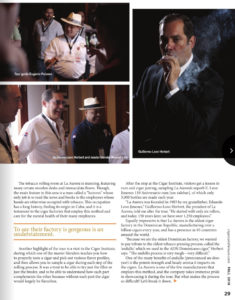 In the article, he describes each and every corner of La Aurora tour. For example, he starts by explaining how the tour begins, with an area that simulates the curing of tobacco in the farms, with leaves hanging from the ceilings, and sections that reproduce, like in a Museum, the process of creating a cigar—from the seed to the making of the final product.

And he goes along making a detailed description of the cigar rolling room, with the invaluable work of cigar rollers, but also of the newspaper reader, that maintains cigar rollers informed. “Impressive” is the adjective used to describe this room.

On the other hand, he speaks of our Cigar Institute, in which you can taste a cigar in each step of the rolling process: only the filler tobaccos, for example, in order to learn how the various parts complement each other. He also explains the learning acquired on how to pair cigars and rum, with the possibility of tasting our rum La Aurora E. León Jimenes 110 Aniversario. 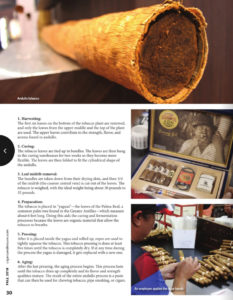 Finally, the text details the Andullo tobacco manufacturing process, which is used to make our La Aurora Dominican DNA cigar. “Since we are the oldest Dominican factory, we wanted to pay tribute to the oldest tobacco pressing process, called ‘Andullo’, which we use in the ADN Dominicano cigar. The Andullo process is very difficult”, are the words of the president of La Aurora, Guillermo León, which are quoted in this article to talk about this technique. 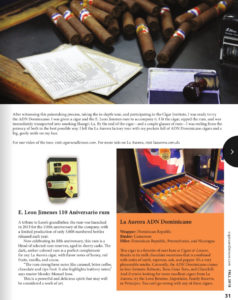 4 thoughts on “La Aurora Factory Tour, in ‘Cigars and Leisure’”