Our La Aurora Preferidos 1903 Edition Platinum Perfecto (Tubo) has been selected by the magazine ‘Cigar Aficionado’ as the cigar of the week. The publication’s experts highlight in their tasting note that this perfecto has an opulent draw and an even combustion.

“Clear impressions of hazelnut and peanut are complemented by notes of cinnamon, baked apple and earth before a short finish of dried fruit,” notes the magazine about our cigar from the Preferidos Doble Figurado line.

La Aurora Preferidos 1903 Edition Platinum Double Figurado Tubo, which ‘Cigar Aficionado’ gives a score of 90 points, is a medium-strength cigar, with a size of 54 X 5″. The magazine has also awarded it 90 points in previous reviews (in May and August 2022).

Its blend is composed of tobaccos from Brazil, Cameroon and Dominican Republic in the filler; a Dominican Republican binder and Ecuadorian wrapper. This cigar has been highly acclaimed by other industry publications. 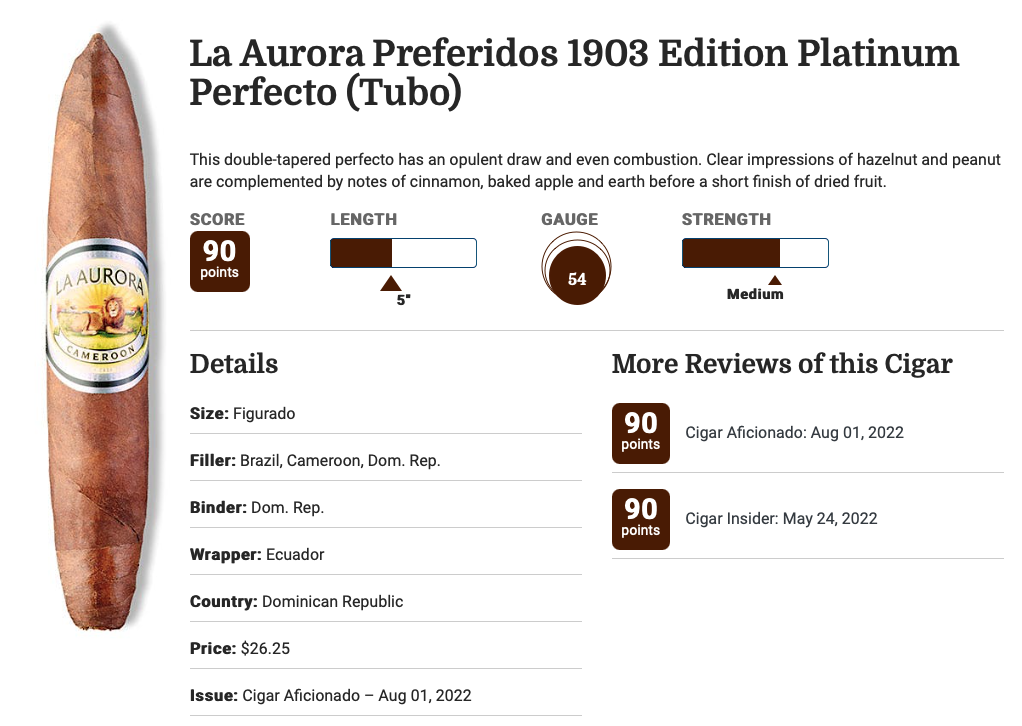 La Aurora Doble Figurado Platinum, also among the best cigars in a tube and ‘Perfectos’

For example, the  ‘Cigar Aficionado’ magazine itself included it in a list of great tubed cigars, published last February. It was also included in another list of the best cigars, ‘Perfectos’, published by the same magazine.

In addition, another specialised publication, ‘Bespoke Unit’, published a review of this cigar last July and included it in its category of spectacular cigars.