We wanted to continue our work, despite the difficulties arising from the situation we are currently living in due to the pandemic. Not only with the manufacture of Premium cigars, but also by spreading knowledge about the art of cigar making and tasting. Therefore, La Aurora Cigar Institute has adjusted to the current situation and has given the first online courses.

Specifically, last September 18, the first virtual course was held. Aimed at fans in the Dominican Republic, it was taught in Spanish by our master blender, Manuel Inoa. For this workshop, we used our Training Kit, a tool we created several years ago to support our teaching and training activities.

People who registered for the course received the Training Kit at home so that they could follow the explanations of our master blender. The “Cigarro Dominicano” magazine reported in its 244thedition the celebration of this virtual workshop. On the second page of the publication, the magazine editors explained how in this course premium cigar lovers could learn more about our passion for the art of creating cigars and how to better enjoy them. 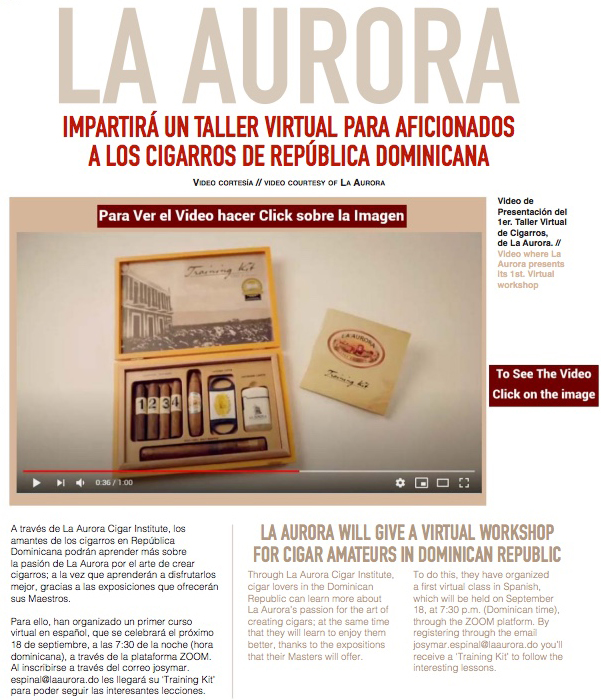 Online courses in Italy and Germany

Along these lines, Manuel Inoa also gave a virtual seminar for the Italian market on November 25. This event was attended by 252 people, including consumers, retailers, journalists, and bloggers. They all showed their satisfaction with the course by asking questions to Manuel and commenting.

Attendees purchased the Training Kit prior to the event. Thus, they were able to follow all the explanations of the master blender with the corresponding tools. On this occasion, the training was made with the La Aurora 107 regular edition Training Kit in Robusto format.

First, Manuel Inoa explained the factors that influence the organoleptic characteristics of a cigar: soil, seed variety, climate, leaf level, harvesting, curing, fermentation, and aging. He then illustrated to the participants how the perception of flavors and aromas of a cigar is like and what notes can be found in a cigar according to its blend.

Finally, attendees proceeded to practicing everything they had learned with the Training Kit. The master blender taught attendees how to detect the tobacco notes in each grade of cigar according to the variety of the tobacco, the soil where it was grown and the leaf level of the tobacco leaves. Later, they did the same enjoying La Aurora 107. The attendees received a diploma for their participation in this seminar issued by La Aurora Cigars and our distributor in Italy, ITA (International Tobacco Agency).

Those attending the virtual workshop for the Italian market were very happy after the event. This was shown in the posts they made on social networks.

On November 27, Manuel Inoa gave an online master class for the German market. About 25 consumers were able to learn how to taste La Aurora 107 Nicaragua under our master blender’s guidance. Also supported by our Training Kit, they expanded their knowledge on Premium cigar tasting and were able to clear up all their doubts by asking Manuel questions.

On the other hand, at the beginning of the month, November 9, an event was held for the Russian market. It was a master class by Manuel Inoa with about 40 participants. In this case, it was a mixed event. That is, the participants followed the class online, but there was also a large group of attendees who followed the event from a cigar lounge in Moscow.

The cigar chosen for the occasion was La Aurora Cameroon 1903, recently chosen as “Best Value” in the Dominican Republic by the readers of the “Cigar Journal” magazine. La Aurora Cameroon 1903 is a tribute to the first cigar produced in La Aurora. It is a cigar composed of a wrapper from Ecuador, a binder from Ecuador and a filler with a blend of tobaccos from Valle del Cibao, Dominican Republic. With an average strength of 6 out of 10, it releases notes of sweet spices, cocoa, wood, and citrus notes of red fruits.

Those attending this event in the Russian market evaluated the experience very positively. In addition, they left very good reviews on online magazines and social media. Among the comments, there was applause for Manuel Inoa’s explanations and for the cigar, for its “quality and impeccable smoke”, as well as its brilliant wrapper.

The mixed event (online and offline) held for the Russian market was also very well received. The participants also talked about it on social media.