La Aurora Cameroon 1903 Robusto and La Aurora 115th Anniversary Toro have both received recognition in the latest blind cigar tasting conducted by Cigars Lover Magazine. Furthermore, the ratings they received from the publication’s experts are very good: 92 points for the former and 90 points for the latter.

With regards to our La Aurora Cameroon 1903 in Robusto format, the magazine noted that it exudes notes of wood, pepper and coffee during the first half of the cigar. These are joined by hints of raisins and vegetal nuances, according to Cigars Lover Magazine. “The profile becomes more pronounced, and a caramel note is added” concludes its tasting note.

This cigar, from the Original Blends line, has an Ecuadorian wrapper and binder and a filler composed of tobaccos from the Dominican Republic and Nicaragua. The Robusto format, selected by the magazine for its blind tasting, has a size of 50 x 5″ (127 mm).

As for the La Aurora 115th Anniversary Toro, this cigar offers roasted notes of coffee and leather with a hint of cocoa powder, according to the magazine’s panel of smokers. “Later on, nutty and vegetal notes enrich the flavour profile,” add these experts. 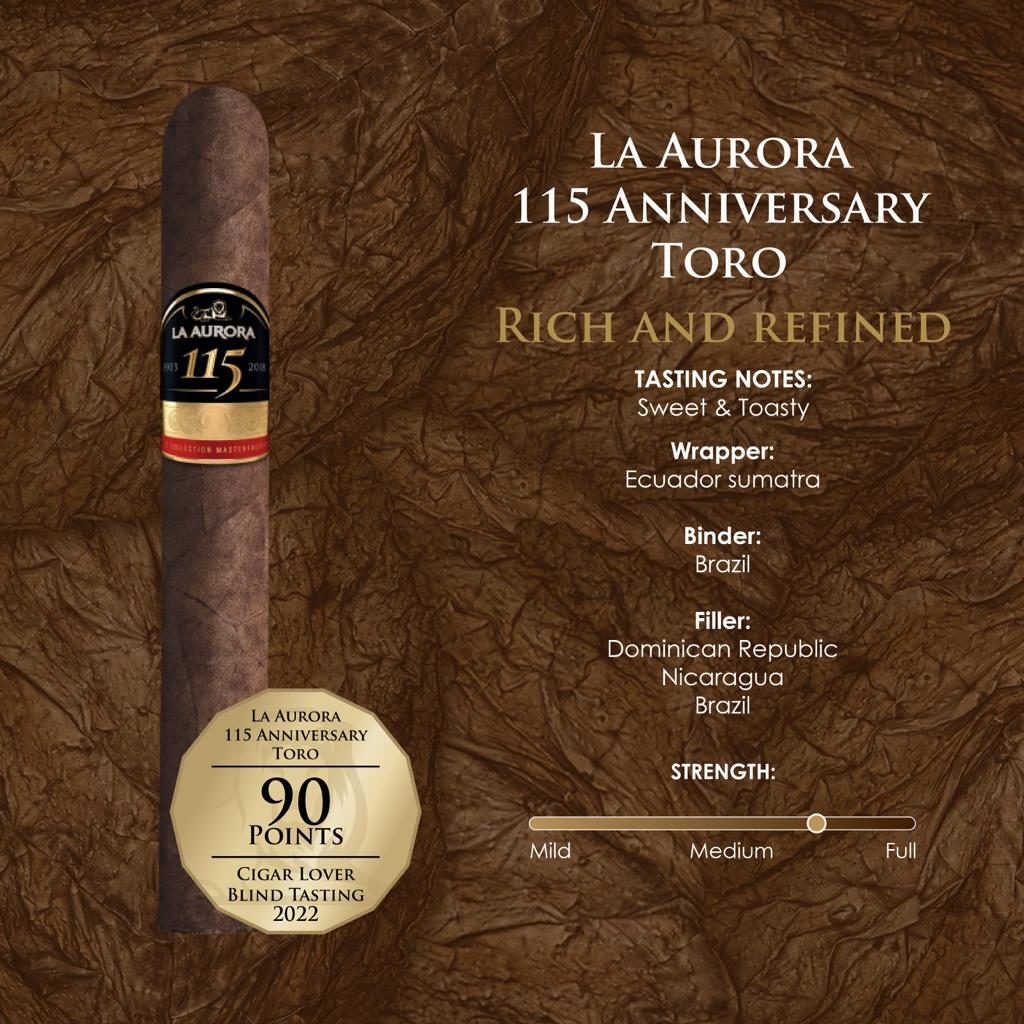 This cigar launched to commemorate our 115th anniversary is composed of a wrapper from Ecuador, a binder from Brazil and a filler with tobaccos from Brazil, the Dominican Republic and Nicaragua. The Toro format analysed in this blind tasting measures 54 x 5 ¾” (146 mm).

During this blind tasting of cigars, the cigar bands are removed and the cigars are re-dressed with a new vitola, which simply bears a number. “The products are then tested in a completely impartial way, in a blind tasting in which the tasters do not know which products they are trying,” the magazine explains.

The evaluations are then collected and the Cigars Lover Magazine team gets to work, calculating averages and creating the final evaluations. The tastings are compared to create the final review and rating, expressed on a scale of 100.