Ever since the Asociación de Fabricantes de Cigarros Dominicanos (Procigar) organized a festival dedicated to cigar lovers for the first time in 2008, La Aurora has never missed the event. In this eleventh edition, taking place between February 18 and 23 in Santiago de los Caballeros, all three scheduled dinners will include one La Aurora cigar plus a Special Edition. In addition, La Aurora will offer an elegant and modern humidor with 182 cigars for the charity raffle.

The Special Edition La Aurora has created for the event consists in 500 ADN Corona Gorda cigars 6 x 47. This cigar is characterized by the inebriating flavor of Andullo—the tobacco used in this process is difficult to work with and is highly exclusive in cigar manufacturing.

Its strength, inebriating aroma and sweetness, combined with a well-balanced mix, provides a completely exceptional smoking experience. In La Aurora ADN Corona Gorda we may highlight the toasted notes of creamy coffee, as well as the chocolate notes, and the spicy notes that linger through the whole smoke.

Another extremely limited edition that La Aurora will present at the Procigar Festival is La Aurora Hors D’Age toro 6 x 54. The expression Hors d’Age means “beyond time” and this is the category that describes the highest quality products and subject to the highest aging where time is the key to reach the ideal level of perfection.

La Aurora cigars are characterized, among other things, by their aging process. With La Aurora Hors d’Age, the oldest cigar factory in the Dominican Republic takes this process to the limit, extra aging them above all others for a minimum of two years in the aging room, in order to achieve a perfectly balanced mix. The time La Aurora invests in the entire process of making this product spans 12 years before it reaches the hands of the end user.

This cigar has a resounding start, when the spicy notes—with a predominance of black pepper—become evident, and then open up to give way to more complex and delicate flavors. The presence of wood is evident throughout the smoke, but it is enriched with nuances of cinnamon, nuts and cocoa that give a very personal touch to this cigar. The long and creamy aftertaste, along with the aforementioned characteristics, make this cigar a true work of art.

Finally, in the Cena de Blanco (White Dinner) taking place in Monumento de Santiago de los Caballeros, La Aurora will deliver La Aurora 1903 Edition Double Barrel Aged (Preferido). This is one of many cigars in our portfolio, but it has never been released in the Dominican Republic. For years, La Aurora has aged the filler and the capote (binding leaf) in 40-year rum barrels used for its super Premium product lines during a minimum of six months. 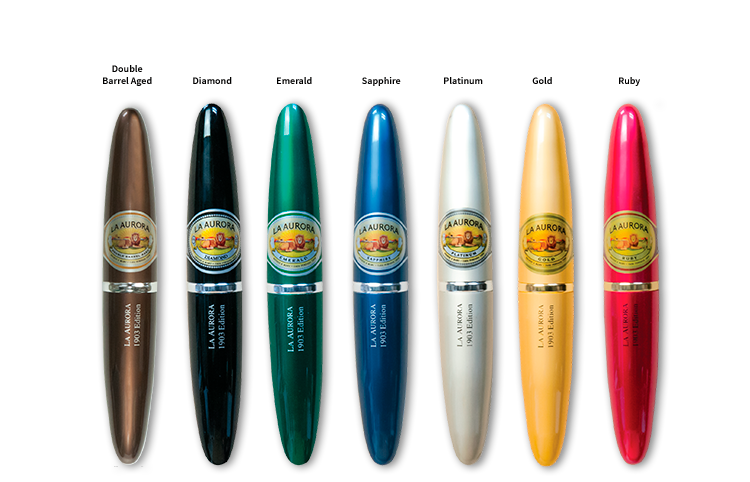 Now, all tobaccos in this product line are aged for at least a year so that all the cigars are perfectly homogenized within the barrels, highlighting notes and aromas that allow us to enjoy accents of smoked wood and a few notes of nuts, combined with roasted coffee and vanilla notes and an accent of berries, all of which stress the elegance of a cigar with rich notes of honey and an unrivaled creaminess that comes from the cocoa notes, resulting in a medium to high strength cigar.

A SOLIDARY HUMIDOR WITH 182 CIGARS

As every year, La Aurora participates in the most supportive night of the year in the Procigar Festival. On this occasion, we participate with a humidor that is completely different from previous years—modern looking and made of noble materials. The humidor interior is covered with Spanish cedar wood—even the trays and cigar dividers are made of this wood—and the exterior is made of solid walnut wood.

Its satin lacquer finishing is very elegant. In addition, it holds a thermometer and hygrometer—analog temperature and humidity meters, respectively. The finishing details, like hinges and hardware, are metallic and silver bathed.

The cigars inside this elegant humidor from La Aurora are no other than La Aurora Preferidos Doble Barrel Aged Parejo (64 corona cigars, 48 Toro cigars and 70 Robusto cigars, up to a total of 182 cigars). We are certain that smoking each one of them will remind us of this night, the most solidary night of Procigar.

On Thursday 22 and Friday 23, La Aurora will offer a tour around the factory and a seminar on its products in the framework of the festival. Procigar was born in 1992, created by the most traditional and experienced cigar manufacturers in the Dominican Republic, who have partnered to “defend, protect and disclose the good name of the Cigar Country land, the world’s major Premium cigar exporter”.