La Aurora 115th Anniversary Regular Edition is among the best cigars in 2019. Specifically, it has been included in the Top 25 of “Cigar Journal” magazine. This specialized publication has ranked the Robusto format of La Aurora 115 Aniversario Regular as one of the best cigars of the year.

Our Commemorative cigar, ranked 17thin this list, is composed of an Ecuador wrapper, a binder from Brazil, and a filler of tobaccos from the Dominican Republic, Brazil and Nicaragua.

In their acknowledgement, “Cigar Journal” speaks of the earthy aromas and a note of wood, “supported by spicy and acidic flavors” of this cigar. They have also detected roasted tart and chili spices aromas, as well as sweet notes (licorice, cocoa). In addition, they have perceived clove and fruity notes, which—they say—grant the cigar “an exciting profile.” 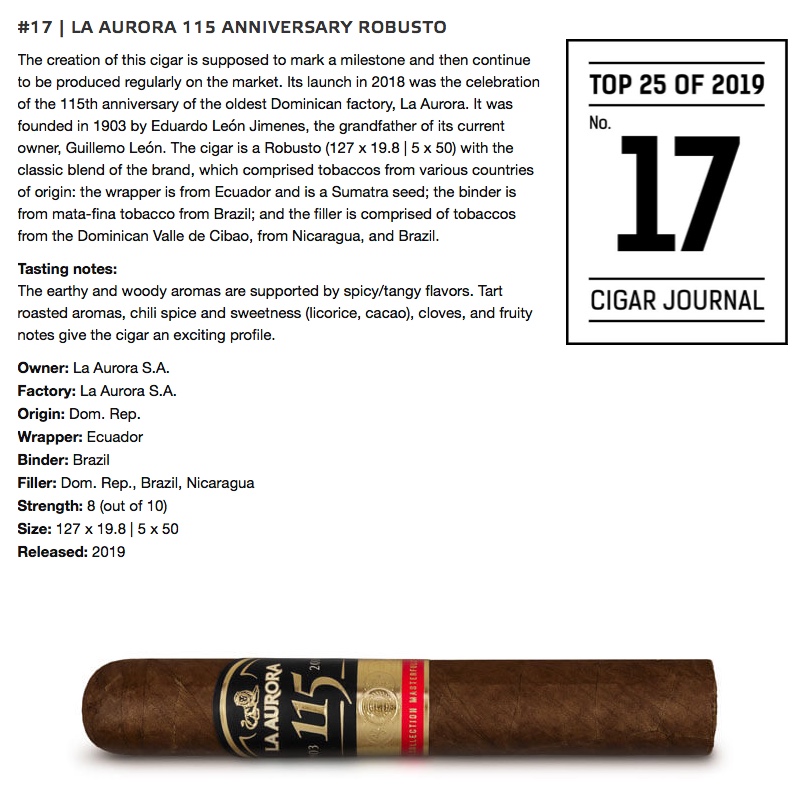 The remainder of the text published in the magazine about La Aurora 115th Anniversary Regular Edition includes information about its release. “It was released in 2018 to celebrate the 115thanniversary of the oldest plant in the Dominican Republic, La Aurora”, they explain.

And about its features: “The cigar is a Robusto shape (127 x 19,8 | 5 x 50) with the brand’s classic blend, that includes tobaccos from several countries of origin. The wrapper is from Ecuador with Sumatra seed; the binder is made of mata-finatobacco from Brazil; and the filler is composed of tobaccos from the Dominican Valle del Cibao, Nicaragua and Brazil.