The Lancero format of our cigar La Aurora 107 has received 92 points from the blog “The Cigar Authority”. In the review, published last August 10, the author explains the history of this cigar’s creation and points out that this is one of his favorites.

After recounting the birth of La Aurora 107 Lancero, a story in which he took part, the author of the review describes the appearance of the cigar: a red, black, gold, yellow and white stripe, with the lion of La Aurora in the center.

As detailed by Bryan—the author of the article—, it is a cigar with an Ecuadorian wrapper. He describes it as an oil-filled wrapper with an even color. “It is an almost impeccable wrapping that rolls up perfectly,” he says in his review. 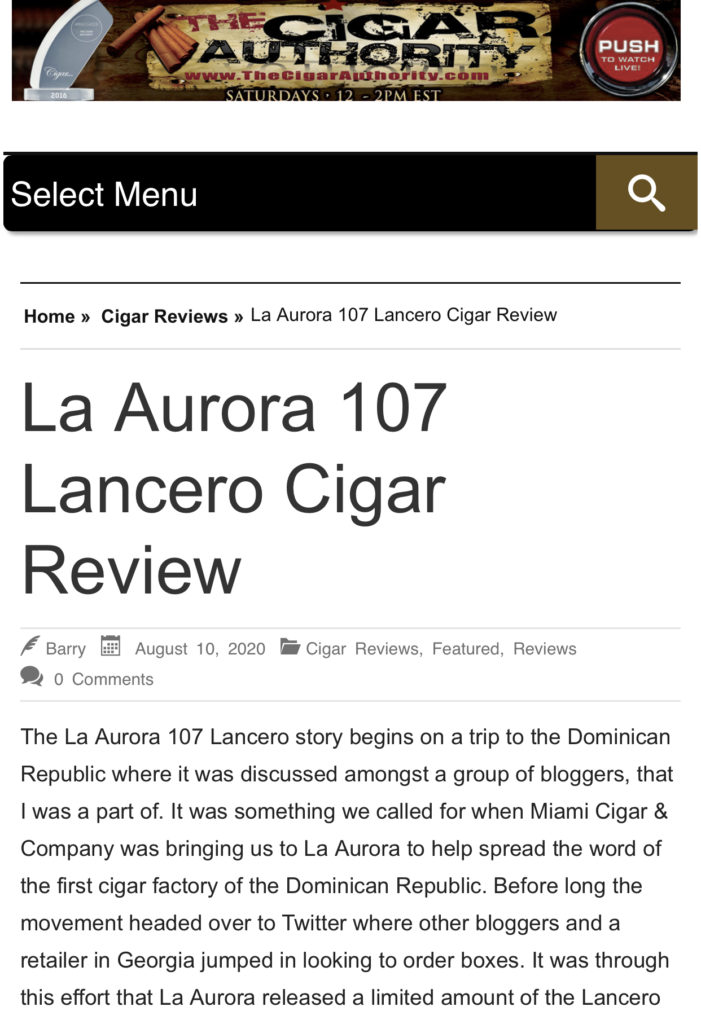 The blend of La Aurora 107 Lancero (6 7/8” x 40) is completed by a binder from Valle del Cibao (Dominican Republic) and a filler from Peru, Nicaragua, and Valle del Cibao. He also adds that this is a cigar that feels very firm in the hand, with a considerable weight for its size.

Packaged in boxes of 21 units, according to this review, this cigar releases sweet aromas with a touch of mocha. In his opinion, the cold tasting gives off a cherry-like sweetness that is “extremely pleasant,” and is “a sign that good things are to come.”

During the smoke, this expert detects citrus and cedar notes at the beginning, while later touches of cherry, apple liqueur, nuts and coffee emerge in the retronasal. In the second third, coffee blends with dried fruits, alternating with a stronger presence, with a hint of cedar and leather in the retronasal.

At the end of the smoke, the leathery notes grow in intensity and become the dominant note when the cigar stripe is removed, as Barry details in his assessment of this cigar.

“In the background, there are still notes of cedar, nuts and coffee with an occasional touch of raisin-like sweetness,” he explains, pointing out that the retronasal still shows some leather. “The cigar has a long umami finish which I find pleasant,” this expert concludes.