Our cigar La Aurora 107 Cosecha 2006 Corona Gorda Especial was granted second place in the “2017 Cigar of the Year Countdown” prize, last January, by Cigar Coop. We have been awarded the plaque that acknowledges the prize during the last edition of the United States International Premium Cigar & Pipe Retailers Association (IPCPR) convention.

“Over the years, La Aurora has been established as one of the iconic factories in the world. This factory has manufactured many excellent cigars. There have also been times when we manufacture an epic cigar… I feel very comfortable in saying that La Aurora 107 Cosecha 2006 Corona Gorda Especial is in the epic category”, wrote William Cooper—founder of the daily Internet magazine on the cigar world, Cigar Coop—in recognition of our cigar. 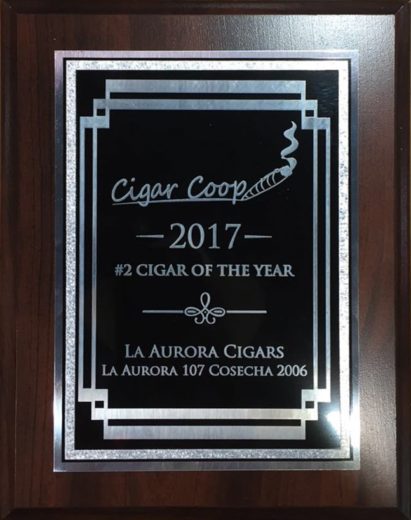 Our limited-edition cigar, released at the end of 2016, has an Equatorial HVA wrapper, Brazilian binder and a filler made from a mix of Dominican and Nicaraguan tobaccos. The cigars were produced in three sizes, in boxes of ten units and production was of a thousand boxes per size. According to Cigar Coop, what really shined was the 6×47 Corona Gorda Especial.

As this publication points out, La Aurora 107 Cosecha 2006 Corona Gorda Especial offers notes of fruit, cream, earth, natural tobacco, wood and a touch of black pepper. With this cigar, it’s the third time La Aurora is awarded a “Cigar of the Year Countdown” prize. The last time it was thanks to La Aurora Cien Años Edición Especial, which won first place as cigar of the year of 2013.