Eugenio Polanco had not yet turned 19 when he was approached to work at La Aurora. And he’s been with the company for 32 years now, as a factory tour guide, a job he wouldn’t trade for the world. He enjoys what he does, and visitors notice that and appreciate it. In addition to the satisfaction he feels when doing his job, he’s also passionate about the world of cigars.

Eugenio Polanco was at Instituto de Idiomas studying English when La Aurora contacted him. “They called saying they needed someone who could speak fluent English, and I always liked interacting with people of other nationalities,” Eugenio explains. He started working on the day of his interview because he was the perfect fit for the position.

But it wasn’t only his language skills and his way with people that made him perfect for the position. Coming from a family with a tobacco tradition—being his father a tobacco-maker—had made him a cigar lover and taster. “When I came to the company, I felt identified with what it was because I had been in contact with tobacco all my life,” Eugenio recalls. And he adds: “That’s why, when I came here, I thought I was meant to be here.”

And he continued to grow in the company. When he saw that Germans and French started coming to visit the factory, he learned German, improved his French… “Today, I am fluent in five languages: Spanish, English, French, German, and Italian. And I have basic knowledge of other languages as well,” says our guide, who welcomes anyone who wants to visit the factory. “Everyone who comes to La Aurora will always be welcomed with a smile and open arms,” he says. 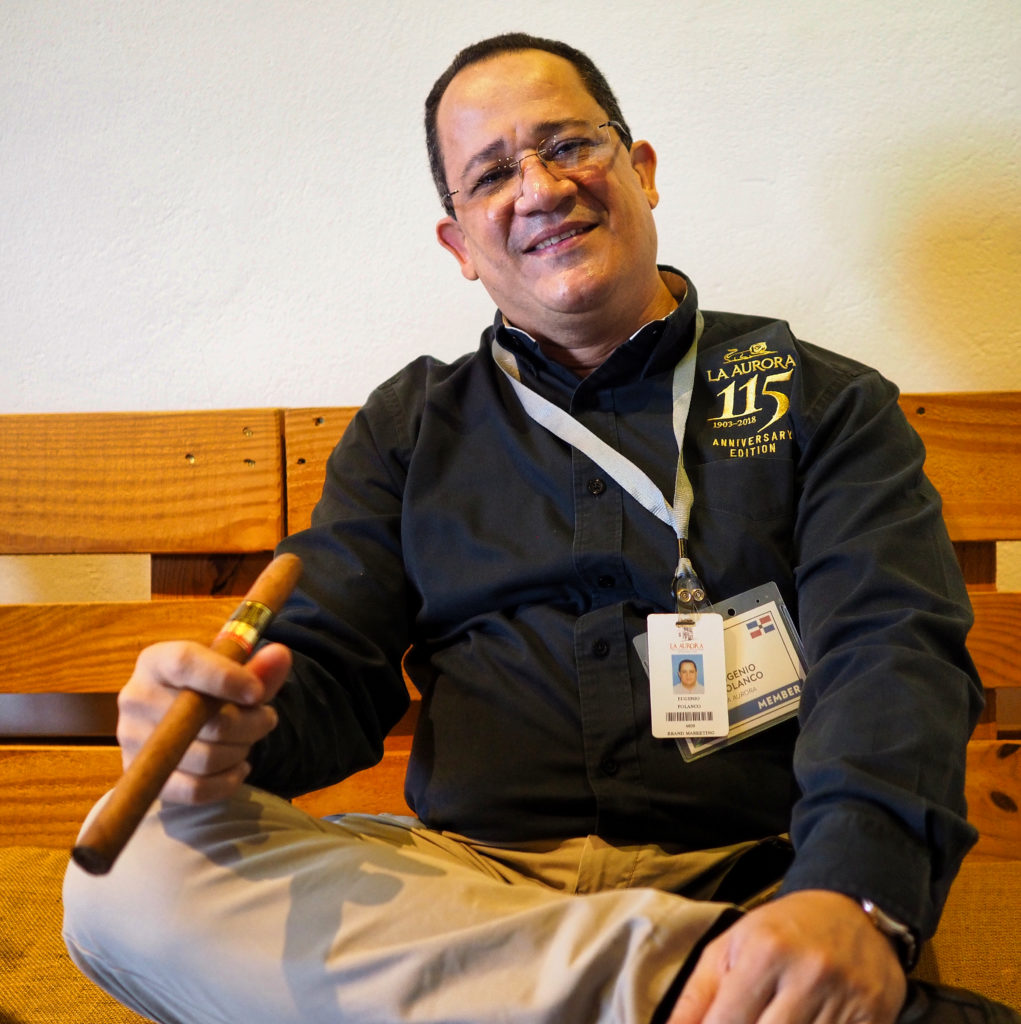 What does working at La Aurora mean to you?

La Aurora isn’t just a cigar factory. La Aurora should be declared patrimony of the Dominican people. If this factory should ever be in trouble—which it won’t because it has the best management in the business—but hypothetically, the Dominican government should rescue it because it’s Dominican patrimony. This is where the real process begins, on the island of Santo Domingo. With La Aurora, the Dominican Republic earned a place in international markets, for its high quality and acknowledgment,” he says.

What do you like most about your job as a guide?

Being able to enjoy my cigar and interacting with people. When I have a cigar in my mouth, I feel that the effect is relaxing, stimulating, it makes me feel very comfortable. On the other hand, I love meeting people from all over the world and meeting new people every day. I’ve gotten used to it and couldn’t live without it anymore. It’s also very gratifying to be able to transfer my humble knowledge to so many people around the world.

What are visitors most curious about?

The agility with which cigar makers make cigars. They see each of these artisans as true artists. It’s impressive to watch them roll the leaves with such agility. They are also excited about the complex tobacco aging process, and about how long it takes. I explain to them that once the tobacco ages, nicotine is less aggressive, and it becomes nobler tobacco. And that makes the product very special.

When visitors see the entire tobacco process, they understand that despite all the steps involved, cigars are an inexpensive product and that we don’t pay much for such a handcrafted product. Cigar manufacturing consists of a long process of harvesting, primary processing, long production, manufacturing, aging processes… Visitors become aware of all things surrounding cigars.

What kind of advice do people who come to the factory ask you for?

I love being asked questions. The audience I like to work with the most is the one that’s learning and entering the world of cigars, because those who already know how to smoke are usually reluctant to adopt new ways of smoking. Logically, you have to give people the freedom to do it their way, but—humbly, with the knowledge and experience garnered—one tries to teach, to give some advice about how it works. 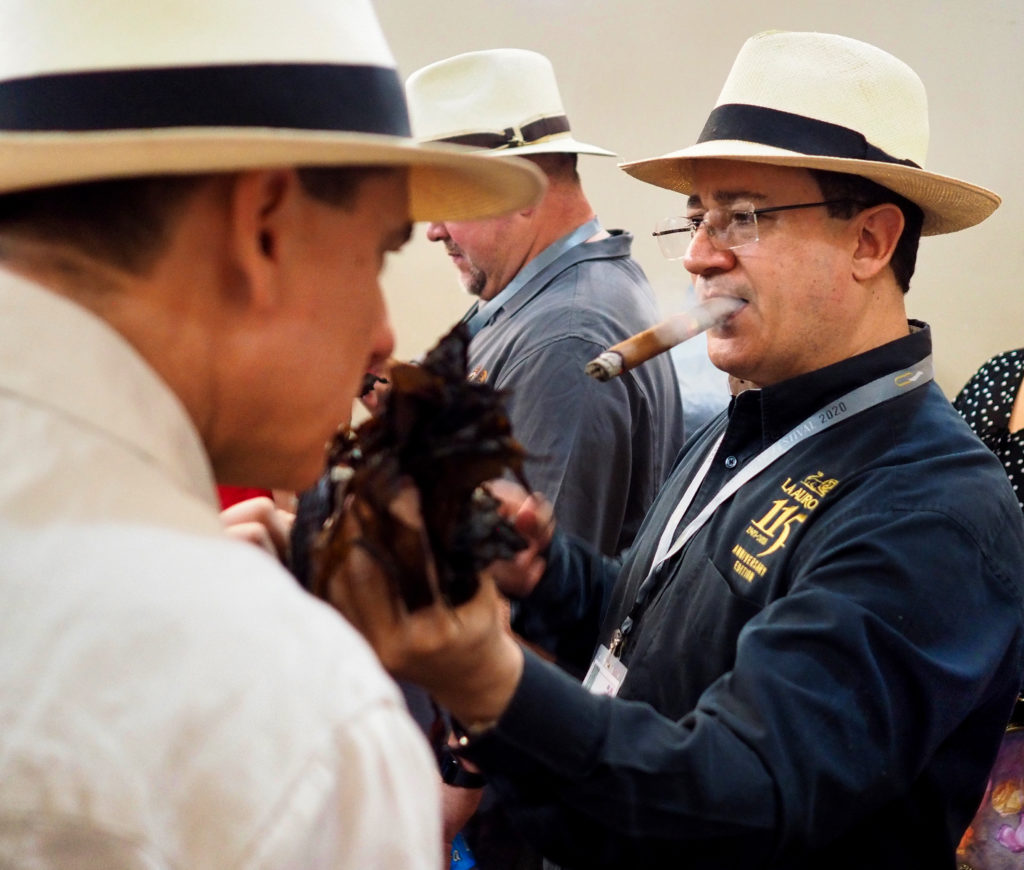 How was the experience with your first cigar?

What type of cigars do you prefer?

My favorite format is Gran Toro. If I could, every time I enjoy a cigar, it would be Gran Toro. I feel that the thicker ash filters more air, you have better combustibility, but also the drag is cooler, smoother. So, it is said that the longer the ash, the better the cigar, because it’s made from whole leaves, it remains firm and consistent.

How does the size of the cigar influence the smoke?

It influences the mouth to feel a greater amount of tobacco, which is comforting. The cigar gives a lot of personality. I haven’t seen products today that have more personality than a cigar.

How do you like the strength of your cigar?

In general, I like medium to high strength. But it all depends on the occasion. If it’s early in the morning, I prefer something softer, like a León Jimenes. It is a smooth-tasting cigar, medium strength, and always has a good draw and good aroma. After noon, after a good meal, it’s great to enjoy La Aurora ADN Dominicano or La Aurora 107. For the evening, I really like La Aurora 1495 Series, what a balanced cigar! Or La Aurora Preferidos Maduro, a tremendous cigar.

If the tasting is long, on the beach, or doing factory tours, I prefer a La Aurora 115 Gran Toro, for the time it lasts. As this is a thick cigar, with a 58” ring gauge, it gives you very firm ash. That same ash filters a little more air and also gives you greater combustibility and as it’s a thick caliber, it gives you a lot of flavor.

With what do you usually pair cigars?

If I’m at work, I’ll pair them with coffee. If I’m not working, with La Aurora rum, which is irreplaceable in a pairing. I have yet to see a drink that pairs so well with the cigar.

<span style=”font-size: 110%;”>“La Aurora rum is irreplaceable in a pairing with cigars. I have yet to see a drink that pairs so well with the cigar”, says our guide through the factory facilities. </span>

What mistakes are usually made when tasting a cigar?

I’ve seen many people holding a cigar with their lips. It’s a practice in which the cigar is left shaking and denotes insecurity. It’s better to do it with your teeth. There are also those who use a lot of perfume and when they touch the cigar, it absorbs the smell of the perfume.

Another common mistake is to knock down the ash as if it were a cigarette. Cigar ash is not thrown away, it is deposited. The cigar is a very elegant, very fine product. It must be treated as such. Everything has its etiquette. Cigar etiquette is to deposit the ash. Also, there are people who, when they put out their cigar, kill it. Cigars have no paper for combustion, they must be left to die with dignity. They put themselves out.

Many people also light a cigar that lasts more than an hour when they only have half an hour. In this way, they lose it. Never light a cigar, enjoy half of it one day, and the other half the next day. The saliva that is deposited on the head of the cigar, decomposes it, and the smell will become unpleasant. That is why it is important to finish it once we light it.

When it comes to cutting the cigar, some people cut a lot from the top and sometimes it unravels. Some people remove the ring immediately and one of the functions of the ring is also to support the outer layer.

What advice would you give to those who are getting started?

The first thing is that they shouldn’t start with a very strong or very long-lasting cigar until they learn more, little by little. As you smoke, you will increase your blend. First, you are a rookie and then you move up to a higher rank, almost like the military. You are testing, you are seeing how you manage your tolerance… I’ve been surprised by people who can enjoy cigars of a certain strength right from the beginning and they hold up well.

What do you think tobacco and premium cigars mean for the Dominican Republic? 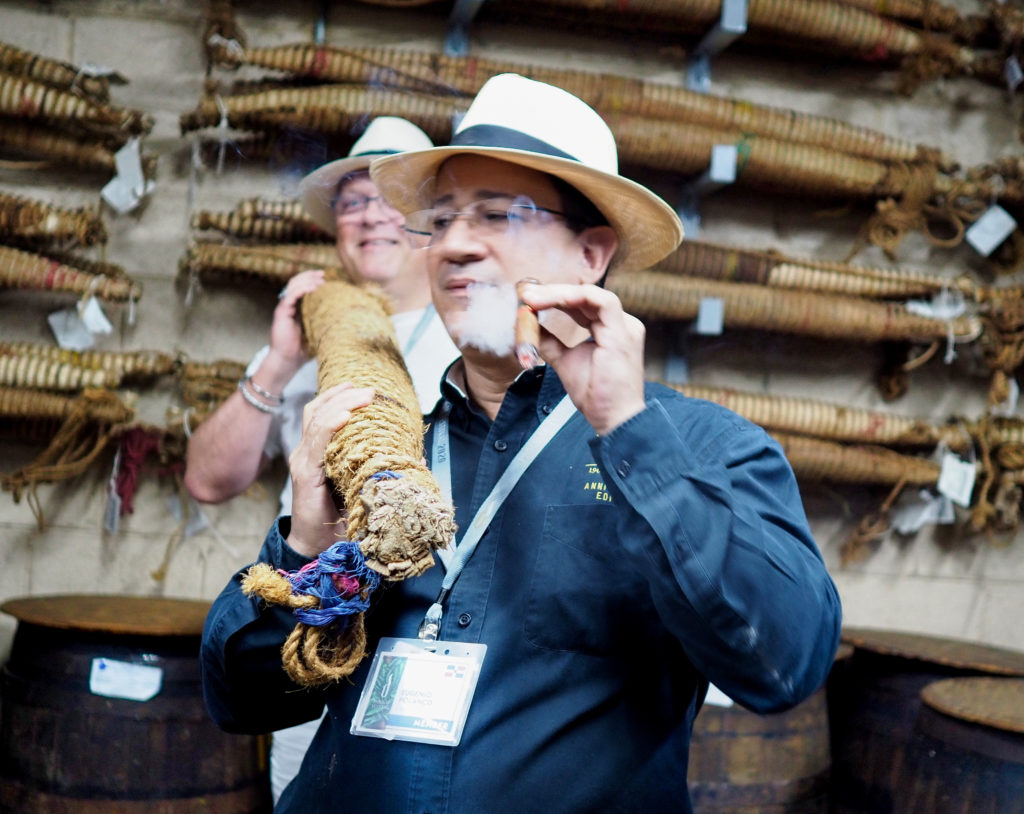 If you weren’t working in this sector, where do you think you would be?

I don’t know. Leaving this would be like leaving what has been my passion. Someone once told me that if you do something and you stop doing it, and then you miss it, you have to go back and do it again. If I ever made the decision to leave this, which I doubt, I would have to come back. Being involved in every stage of the process every day, makes me define the cigar as a large number of tobacco leaves of different varieties dried, fermented, and aged and then rolled in the form of a tube or other formats, which when smoked and savored produce a pleasant and relaxing effect. That is the definition I give to the cigar according to the years I have been here—by now over 30.